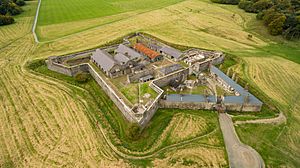 Aerial view of the Magazine Fort

The Christmas Raid or Magazine fort raid happened on the 23 December 1939. The Irish Republican Army (IRA) stole a lot of weapons and ammunitions (bullets) from the Irish Army. Although the theft from the Magazine Fort building in Phoenix Park was successful, most of what was stolen was recovered by the Irish Army a few days later. Several IRA volunteers were arrested.

The reason for the raid was that the IRA had many Thompson submachine guns. They found it hard to get the .45 ACP bullets used in these guns in Europe. Because the Irish Army also used the Thompson and had large supplies of bullets, the IRA decided to steal some.

Around 2030 the gate bell rang, and the Military Police officer on guard opened the gate a little for a civilian who said he had a parcel to deliver to the officer-in-charge. The unidentified man told the MP to open the gate fully and put his hands up. At this point the IRA team appeared from both inside and outside the fort, confiscating the weapons of the sentry and MP.

The two hostages were then forced to act as human shields for the two intruders to the guardroom where the remaining soldiers were caught by surprise and gave up without a fight. The captives heard 'many' heavy lorries coming and going from the depot. At 2210 hrs the IRA locked the prisoners in the so-called 'C' Magazine area which the raiders had completely emptied.

It was 2250 by the time a party of soldiers was sent from Portobello Barracks to find out what was happening at the fort. They managed to catch two of the raiders.

A total of 1,084,000 rounds of ammunition had been taken and removed in thirteen lorries with no casualties.

Over the next three to four days a large, nationwide hunt was organised to find the stolen items.

On 1 January 1940 it was reported that almost three-quarters of the ammunition had been found, a total of 850,000 rounds;

In addition, some IRA volunteers who were caught storing the ammunition were arrested.

What happened after the raid

The raid was not good for the IRA. The massive hunt to find what was stolen turned up all and more. It caused IRA Volunteers to be arrested.

The day after the raid the Irish Minister for Justice, Gerald Boland, at an emergency meeting of the Dáil (government) introduced the Emergency Powers bill to allow internment (taking prisoner), Military Tribunal, and executions for IRA members. It became the Emergency Powers Act.

All content from Kiddle encyclopedia articles (including the article images and facts) can be freely used under Attribution-ShareAlike license, unless stated otherwise. Cite this article:
Christmas Raid Facts for Kids. Kiddle Encyclopedia.