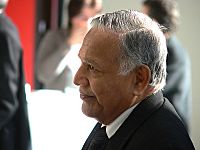 Weeramantry was born in Colombo, Sri Lanka. He studied at Royal College Colombo, at King's College London, and at the University of Ceylon.

Weeramantry was a Judge of the Supreme Court of Sri Lanka from 1967 to 1972. He was also an Emeritus Professor at Monash University and the President of the International Association of Lawyers against Nuclear Arms.

All content from Kiddle encyclopedia articles (including the article images and facts) can be freely used under Attribution-ShareAlike license, unless stated otherwise. Cite this article:
Christopher Weeramantry Facts for Kids. Kiddle Encyclopedia.