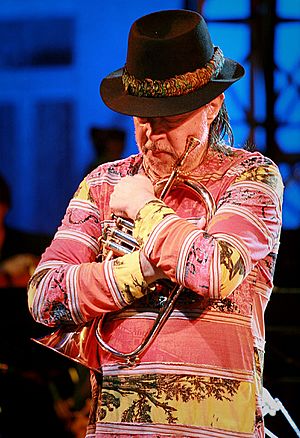 Charles Frank "Chuck" Mangione (born November 29, 1940 in Rochester, New York) is an American flugelhorn player. His best known hit single is Feels So Good which was the Billboard Easy Listening Singles number-one single on May 13, 1978 and has been featured in many movies like Zombieland and Let's Go to Prison. Chuck Mangione has been mentioned on the animated television show King of the Hill and lends his voice to the show.

All content from Kiddle encyclopedia articles (including the article images and facts) can be freely used under Attribution-ShareAlike license, unless stated otherwise. Cite this article:
Chuck Mangione Facts for Kids. Kiddle Encyclopedia.