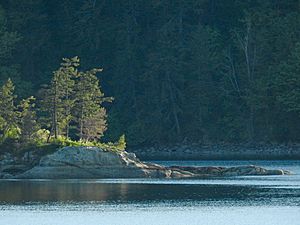 Chuckanut Point near the south end of Chuckanut Bay

Chuckanut Bay is a crescent-shaped bay about three miles (4.8 km) long in southwestern Whatcom County, directly south of Bellingham, Washington, United States. The bay was formed along the axis of a plunging syncline during the formation of the Chuckanut Mountains . It is situated on the east shore of the Salish Sea at the southeast end of Bellingham Bay. The bay was named Puerto del Socorro by Lieut. Juan Francisco de Eliza in 1791. The present name was chosen by Capt. Henry Roeder on December 1, 1852. The name 'Chuckanut' is derived from a native word for "Long beach far from a narrow entrance" Prominent natural features include Pleasant Bay located south of Chuckanut Bay, Mud Bay to the north and Chuckanut Island (aka Dot Island) and Chuckanut Rocks to the west. Other natural features include Teddy Bear Cove, Governors Point and Clark Point. The most prominent creeks that drain into the bay are Chuckanut Creek and Fragrance Lake Outlet. The bay is home to interesting tafoni formations found in the area.

Chuckanut Village, located near Mud Bay along the north shore of Chuckanut Creek, is the southernmost neighborhood in Bellingham. The Chuckanut Bay Community is further south of Chuckanut Village and had a population of 60 people in the 1940s. It was centered around a ferry landing for the San Juan Islands and Sydney, BC from 1935 to 1941. After the ferry closed, the landing became the foundation for the Chuckanut Bay Yacht Club. When the yacht club closed in 1946, the clubhouse was moved to LaConner WA and is now a waterfront restaurant there.

The Chuckanut Bay Community Association (CBCA) currently has a membership of over 400 households. The CBCA is a non-profit organization committed to foster a spirit of community among residents in the Chuckanut Bay and Chuckanut Mountain area. The CBCA was initially formed in 1992 to support volunteer firefighters in their district, and continues today as a non-profit organization dedicated to serving the Chuckanut community. The communities are linked to Bellingham and Burlington by State Route 11, also known as Chuckanut Drive.

All content from Kiddle encyclopedia articles (including the article images and facts) can be freely used under Attribution-ShareAlike license, unless stated otherwise. Cite this article:
Chuckanut Bay Facts for Kids. Kiddle Encyclopedia.