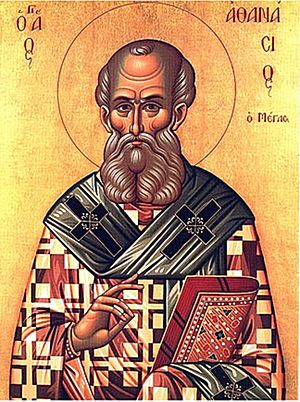 St. Athanasius, depicted with a book, an iconographic symbol of the importance of his writings.

Most Church Fathers are honored as saints in the Catholic Church, the Eastern Orthodox Church, Oriental Orthodoxy, the Church of the East, Anglicanism and Lutheranism, as well as other churches and groups. The era of these scholars who set the theological and scholarly foundations of Christianity largely ended by 700 AD. 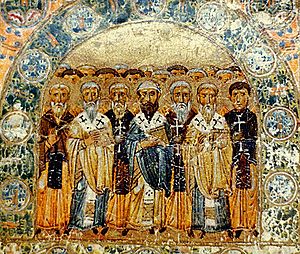 While western churches regard only early teachers of Christianity as Fathers, the Orthodox Church honors as "Fathers" many saints far beyond the early centuries of church history, even to the present day.

The study of the Church Fathers is known as "Patristics".

All content from Kiddle encyclopedia articles (including the article images and facts) can be freely used under Attribution-ShareAlike license, unless stated otherwise. Cite this article:
Church Father Facts for Kids. Kiddle Encyclopedia.