The Church Hill Historic District is a mid-to-upper-class residential area north of Portage's downtown. It was added to the National Register of Historic Places in 1997 for its significance in architecture and social history.

The district is named for the six churches on the hill. It lies on a southeast-sloping hillside with the downtown to the south, the Society Hill historic district to the west, and later, middle and upper-class neighborhoods to the north and east. The homes in the Church Hill district were built as early as 1855. The most common styles are Queen Anne and Italianate, with notable structures listed below in the order built. 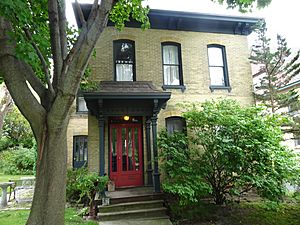 The district contains examples of various architectural styles, and a typical progression is seen in the list above. The NRHP also considers the district significant for social history, since the five churches of the district contributed to unify the community, cutting across class and ethnicity.

All content from Kiddle encyclopedia articles (including the article images and facts) can be freely used under Attribution-ShareAlike license, unless stated otherwise. Cite this article:
Church Hill Historic District (Portage, Wisconsin) Facts for Kids. Kiddle Encyclopedia.