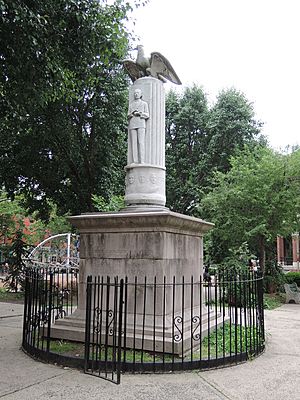 Church Square Park is a park in Hoboken, New Jersey it is bordered on the west by Willow Avenue, the east by Garden Street, the north by 5th Street and the south by 4th Street. Park Avenue is blocked by the park. Church Square park is surrounded by landmarks, such as the OLG church, the Hoboken Public Library on the north side, the Demarest School Building on the east, and nearby Hoboken University Medical Center.

Renovation began in 2012 for Church Square Park after much community input as part of a City wide park improvement plan.

There is a gazebo in the center of the park, it used to be a fountain, where weekly outdoor concerts are held in the summer and fall. The playground and swings are slightly southeast of the gazebo, and there are also 4 fields (formerly 6), a dog run, and many bushes. In 1994, the wooden playground that had been in place for a long time was destroyed and replaced with a safer playground.

All content from Kiddle encyclopedia articles (including the article images and facts) can be freely used under Attribution-ShareAlike license, unless stated otherwise. Cite this article:
Church Square Park Facts for Kids. Kiddle Encyclopedia.