The Church of Holy Trinity is a Church of England parish church in Eltham, Royal Borough of Greenwich, London. The church is a grade II listed building. It is the location of the Gallipoli Memorial Chapel, which was dedicated in 1917 to those who had died in the Gallipoli Campaign. 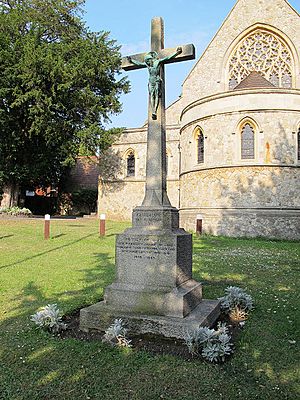 War memorial outside the Church

From 1868 to 1869, the chancel, transepts, and the East bays of the nave were built, having been designed by G. E. Street. In 1908, a vestry, baptistery, and the Western part of the nave were added by Sir Arthur Blomfield and Sons. The church is Gothic Revival in style.

In 1909, Edith Gertrude Latter funded the building of the St Agnes Chapel. It was designed by Sir Arthur Blomfield and Sons, and was decorated by C. E. Kempe and Co. During the First World War, the vicar, Henry Hall, served as a military chaplain with the 29th Division, British Army. They fought in the Gallipoli Campaign, during which Hall was injured and invalided out of the army. Having returned to his parish, the vicar wanted to commemorate those who has lost their lives during the campaign. He converted the St Agnes Chapel into the Gallipoli Memorial Chapel; it was unveiled by General Sir Ian Hamilton on 25 April 1917.

On 8 June 1973, the church was designated a grade II listed building.

The parish of Holy Trinity, Eltham is located in the Archdeaconry of Lewisham & Greenwich in the Diocese of Southwark.

The parish stands in the Inclusive Catholic tradition of the Church of England. It is a member of Inclusive Church.

All content from Kiddle encyclopedia articles (including the article images and facts) can be freely used under Attribution-ShareAlike license, unless stated otherwise. Cite this article:
Church of Holy Trinity, Eltham Facts for Kids. Kiddle Encyclopedia.