Church of Our Lady of the Assumption, Englefield Green facts for kids

The Church of Our Lady of the Assumption is a Roman Catholic church in Englefield Green, Surrey. It is situated on Harvest Road in the village, just off the A30 road. It was built from 1930 to 1931 and designed by Joseph Goldie. Although the church is not a listed building, English Heritage, in two separate reports, stated "This is a thumping great church," and "many churches were being built in the Romanesque style in the 1930s ... but Goldie's church is better composed and more competently detailed than most."

In 1903, a priest came from Twickenham to serve the local Catholic community in Englefield Green. Mass was held in a small chapel made of iron within the grounds of Sandylands, a property owned by a Major General Arthur Kennedy Rideout who also arranged transport for the priest. In 1907, a larger wooden church was constructed on Harvest Road, named St Cuthbert's Church. The iron chapel in Sandylands was moved and attached to the church.

In the late 1920s, Gerard and Miriam Jurgens bought the site for a new church and paid its construction. The foundation stone was laid on 25 October 1930. On 20 September 1931, the church was opened. It is in an Italian basilica style and was designed by Joseph Goldie, son of Edward Goldie and grandson of George Goldie. He also designed the Church of Our Lady and St Peter in Leatherhead. The Jurgens family asked for the dedication to be changed to the Assumption of Our Lady. After the church was built, the old wooden church was attached to the new church and became the parish hall.

The church has a single nave with aisles to the sides. The entire interior is painted. Above the main altar is a painting of the Assumption of Mary by the Spanish artist Antonio Palomino, painted in the seventeenth century. The organ was given to the church by David Greig, owner of the supermarket chain. 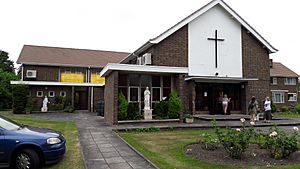 The church is in the parish of St Cuthbert, which includes the St John of Rochester Church in Egham Hythe and the Catholic chaplaincy to the nearby Royal Holloway College of the University of London.

All content from Kiddle encyclopedia articles (including the article images and facts) can be freely used under Attribution-ShareAlike license, unless stated otherwise. Cite this article:
Church of Our Lady of the Assumption, Englefield Green Facts for Kids. Kiddle Encyclopedia.