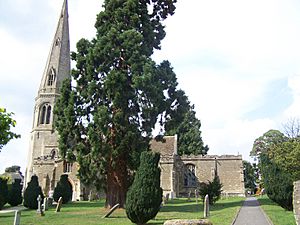 The Church of St Laurence, Stanwick

The Church of St Laurence is a Grade I listed building in the village of Stanwick in East Northamptonshire. It was originally within the Church of England Diocese of Lincoln but was transferred to the Diocese of Peterborough in 1541 towards the end of the Dissolution of the Monasteries during Henry VIII's reign.

Many earlier records incorrectly recorded the name of the church as “St Lawrence” instead of “St Laurence”. For example The Buildings of England: Northamptonshire and Architectural Notices of the Churches of the Archdeaconry of Northampton. Historic England's National Heritage List for England was corrected in 2014.

The string-course on the Nave, and the serrated hood of the east side of the Chancel-arch, prove that the original Church of Stanwick consisted of Nave and Chancel of about 1200. In about 1230 the Tower, south Aisle and porch were probably added. The Spire was not finished till the beginning of the 14th century. Later a Perpendicular Chancel was substituted for the original structure, a few Decorated windows were inserted, and some reparation continued at intervals, until the parvise, the low roof, and the battlement completed the work. A rebuilding of the Chancel occurred in 1823.

The Tower is an octagon, but the north-east and south-east sides are filled up with the Tower stairs, so that a square face is presented to the body of the church, without disturbing the spirit of an octagonal arrangement.

The original fabric of the Nave is earlier than that of the Tower and the Chancel. There have been perpendicular insertions in the Nave and the Chancel was rebuilt in the 15th or 16th century, and again restored in the early 19th century. The present Chancel is about three feet narrower than the original one.

The Porch is original, the outer door having jamb-shafts of Early English character. There is no clerestory. The battlements throughout the Church are Perpendicular.

In Richard Cumberland’s memoirs, he writes “The Spire of Stanwick Church is esteemed one of the most beautiful models in that style of architecture in the kingdom ; my father (Denison Cumberland) added a very handsome clock, and ornamented the Chancel with a railing, screen, and entablature upon three-quarter columns, with a singing gallery at the west end, and spared no expense to keep his Church not only in that neatness and decorum, which befits the house of prayer, but also in a perfect state of good and permanent repair.”

The pulpit was presented by John Dolben, Bishop of Rochester, and once Rector of Stanwick in 1778.

The weathercock is 157 feet above ground, and was given to the church in 1882 by George Henson the then landlord of the Duke of Wellington inn.

The following list is based on the Clergy of the Church of England database (CCEd) and a plaque in the church. The spelling of names may change as early names were spelt in Old English, Middle English or Medieval Latin.

All content from Kiddle encyclopedia articles (including the article images and facts) can be freely used under Attribution-ShareAlike license, unless stated otherwise. Cite this article:
Church of St Laurence, Stanwick Facts for Kids. Kiddle Encyclopedia.