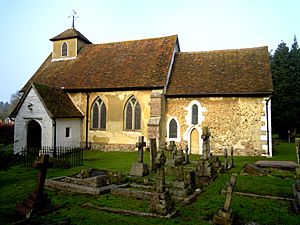 Church of St Mary the Virgin in Letchworth

The Church of St Mary the Virgin is the former Church of England parish church for Old Letchworth in Letchworth Garden City in Hertfordshire. The current church was built in the late 12th century and is Grade II listed. It comes under the Diocese of St Albans.

The oldest building in the area and only 60 feet long inside, until 1903 St Mary's was the parish church for the old village of Letchworth. Mentioned in the Domesday Book of 1086, parts of the building date to the 11th century and is built on the remains of an older Saxon structure. However, most of what is seen today dates to the late 12th century and was reroofed in the 15th century when the south porch was also added. The nave has three bays and a chancel. The church has a pyramidical timber-framed bell-cot with a tiled roof at the west end inside which is a bell dating to the 14th century. The exterior is of flint and ironstone random rubble, partly rendered, with freestone dressings and ashlar, brick and tile buttresses. The windows in the nave have a Y tracery. The gabled porch has a square headed doorway with shields in spandrels. Inside there is a carved effigy of the Crusader Sir Richard de Montfichet on a window sill. His heart is reputedly buried under the church. 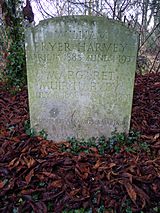 Grave of W. F. Harvey in the churchyard of St Mary's Church in Letchworth

All content from Kiddle encyclopedia articles (including the article images and facts) can be freely used under Attribution-ShareAlike license, unless stated otherwise. Cite this article:
Church of St Mary, Letchworth Facts for Kids. Kiddle Encyclopedia.