The Church of St Mary, Lowe House is a Roman Catholic Parish church situated on North Road in St Helens, Merseyside. The present church was founded in 1924 and staffed by the Society of Jesus until 1981. It is a Grade II listed building with Romanesque and Gothic features. 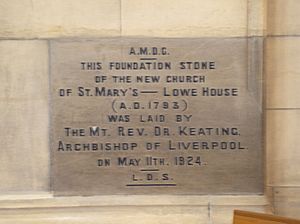 The church is named St Mary's Lowe House because it was built on a piece of land that was occupied by Lowe House. It was given in 1793 by Winefred Eccleston née Lowe, the widow of John Gorsuch Eccleston, the owner of Eccleston Hall, in Eccleston, outside St Helens.

To accommodate the growing Catholic population in the town, a new church was built in 1924 by the side of the original church (which was eventually demolished in 1930). The foundation stone was laid by the Archbishop of Liverpool, Frederick Keating on 11 May 1924. The scale was decided on by Fr Reginald Riley SJ, who wanted a larger size church for the local Catholic community. He was parish priest at the church from 1912 to 1946. The church was opened three years later, in 1929, and was designed by Charles B. Powell, an Irish architect who did other architectural work for the Jesuits in Dublin. It is colloquially referred to as 'The Basilica of St Helens' and 'The Poor Man's Cathedral' by people in St Helens, because construction of the church was funded by donations from the local population during a time of economic struggle.

The dome, designed in a Romanesque crossed with Gothic style, is on the point where the nave, sanctuary and transepts meet, sitting on a castellated octagonal tower. There is a copper cross on the dome that is 16 feet high. It was given to the church by the family of a local builder, James Yearsley whose company helped lay the foundations. The clock face on the 130 ft tall tower is set in gold mosaic.

A major feature of the clock tower is the historic Carillon (bells playable in musical notation by a keyboard, rather than in sequences by ropes). Cast and built by renowned bellfounders John Taylor & Co. of Loughborough, it is the largest in the North West of England housing 47 bells. The Carillon is regularly played and there are also occasional recitals by visiting Carillonneurs.

On 27 July 1980, the head of the Jesuits in Britain announced to the congregation that, as of Easter 1981, the church would no longer be staffed by Jesuits and would be handed over to the Archdiocese of Liverpool.

All content from Kiddle encyclopedia articles (including the article images and facts) can be freely used under Attribution-ShareAlike license, unless stated otherwise. Cite this article:
Church of St Mary, Lowe House Facts for Kids. Kiddle Encyclopedia.