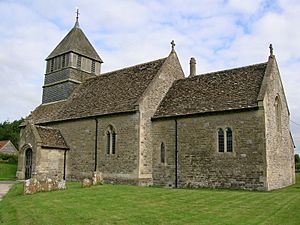 The Church of St Mary Magdalene

The Church of St Mary Magdalene is the Anglican church in the village of Winterbourne Monkton, Wiltshire, England. It is a 19th-century rebuilding of a structure dating from the 14th century.

Its history dates from the 12th century, with the vicarage being consecrated before 1229. It was attached to Cirencester Abbey and then Avebury. The endowment of the church was considered too small many times during the Middle Ages.

An unusual feature inside the church is two huge tree trunks near the west end which originally supported the bells in the free-standing bell tower. That tower was joined to the chancel by the addition of the nave in the 14th century. The tower contains three bells dating from the 17th century. The church was rebuilt in 1877–9 by William Butterfield and is Grade II listed.

The circular font is from the 12th century, while the pulpit is from the 17th. The font is decorated in a zigzag style with foliage supported by trumpet scallops. On the northern side is a figure with splayed legs. There is some evidence that the font was originally painted. It has been speculated that the figure, which has three horns or a crown, could be an example of a Sheela na gig although several of its features contradict this suggestion.

All content from Kiddle encyclopedia articles (including the article images and facts) can be freely used under Attribution-ShareAlike license, unless stated otherwise. Cite this article:
Church of St Mary Magdalene, Winterbourne Monkton Facts for Kids. Kiddle Encyclopedia.