Church of St Mary and All Saints, Droxford facts for kids

The Church of St Mary and All Saints is an Anglican church in the village of Droxford, in Hampshire, England. It is in the Diocese of Portsmouth, and is one of the churches of the Meon Bridge Benefice. The building is Grade I listed; the earliest parts of the church date from the Norman period. 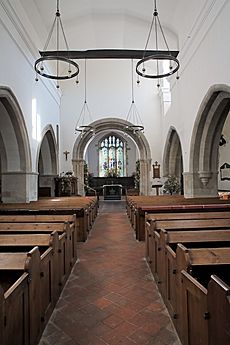 The nave, looking towards the chancel

The Norman chancel arch has two orders on the nave side, the inner having a zigzag pattern; on the chancel side there is one plain order. The north and south doors in the nave, moved from their original positions, have Norman arches with zigzag and other decoration. The nave, of which the north and south sides were originally the walls of the church, has three bays, the arcades having pointed arches.

The aisles were rebuilt in the 15th or early 16th century. The tower was built, perhaps replacing an earlier tower, in 1599. The wooden altar rail, with balustrades of turned shafts, is of the 17th century.

In the 18th century there was renovation of the roofs of the nave and chancel, and ceilings were added. There was restoration of the church in 1903.

All content from Kiddle encyclopedia articles (including the article images and facts) can be freely used under Attribution-ShareAlike license, unless stated otherwise. Cite this article:
Church of St Mary and All Saints, Droxford Facts for Kids. Kiddle Encyclopedia.