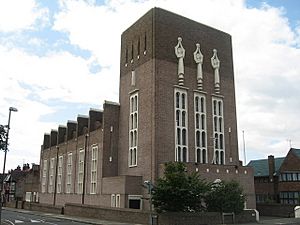 St. Monica's is a Roman Catholic parish church in Bootle, Merseyside. The church building was designed by the architect F. X. Velarde. Construction was started in 1930 and completed in 1936, and the church was dedicated by Archbishop Richard Downey on 4 October that year. It is a brick structure with a green glaze pantile roof, and is a Grade I listed building. The church is inspired by German churches of the 1930s. Three sculptures of angels were sculpted by H. Tyson Smith. Other sculptures include winged creatures. The current priest is Father Pat Sexton who has been at the church since 2001 after he succeeded Cannon O'connor. Coordinates: 53°27′14″N 2°58′48″W﻿ / ﻿53.454°N 2.980°W﻿ / 53.454; -2.980

All content from Kiddle encyclopedia articles (including the article images and facts) can be freely used under Attribution-ShareAlike license, unless stated otherwise. Cite this article:
Church of St Monica, Bootle Facts for Kids. Kiddle Encyclopedia.