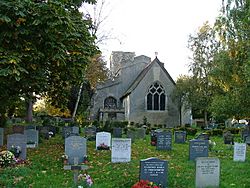 Church of St Peter is a Grade I listed church in Arlesey, Bedfordshire, England. It became a listed building on 31 October 1966.

Internal evidence dates the church to originally be from the 12th century, as only a nave. Aisles were later added in the 13th and 14th centuries.

In the 1600s, the original tower collapsed and was replaced by a small wooden belfry for many years.

A nearby building that used to serv as a vestry, chapel and school was demolished in 1855 and replaced by the current vestry.

The nave is 64 feet long by 17 feet wide. The chancel adds 16 feet in length with a width of 26 feet. The two aisles add around 10ft each. The modern tower is around 12 feet square.

All content from Kiddle encyclopedia articles (including the article images and facts) can be freely used under Attribution-ShareAlike license, unless stated otherwise. Cite this article:
Church of St Peter, Arlesey Facts for Kids. Kiddle Encyclopedia.