The Church of the Blessed Virgin Mary in Huish Episcopi, Somerset, England has 12th-century origins, but was largely rebuilt in the 14th, 15th and 16th centuries. It has been designated as a Grade I listed building. 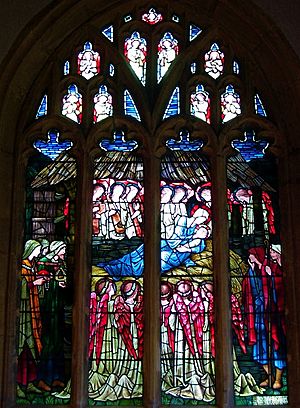 St Mary's Church also serves nearby Langport. Built in blue lias with golden hamstone decoration, the church is most noted for its classic 100 feet (30 m) Somerset tower, deemed to be an architectural companion piece to St Martin's Church in Kingsbury Episcopi.

A church was present on the site during the 11th century. The current church was built after a fire in the previous structure. It was dedicated in 1232.

St Mary's tower dates from around 1500 and was built in four stages replacing an earlier central tower. It is extensively embellished with pinnacles and quatrefoil panel bands. In the north-east corner is an octagonal stair turret which reaches the full height of the tower. The tower was depicted on a postage stamp in 1972.

A stained glass window by Edward Burne-Jones is also noteworthy.

All content from Kiddle encyclopedia articles (including the article images and facts) can be freely used under Attribution-ShareAlike license, unless stated otherwise. Cite this article:
Church of the Blessed Virgin Mary, Huish Episcopi Facts for Kids. Kiddle Encyclopedia.