Church of the Holy Prince Lazar, Birmingham facts for kids 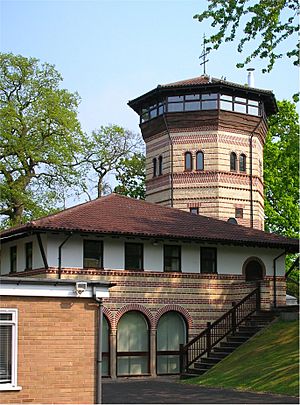 The Serbian Orthodox Church of the Holy Prince Lazar (Serbian: Српска православна црква Светог кнеза Лазара), also known as Lazarica (Лазарица), is a Serbian Orthodox church located at Cob Lane in Bournville, Birmingham, England and was built for political refugees from Yugoslavia after World War II, with the support of the exiled Prince Tomislav of Yugoslavia.

Serbs have been associated with Bournville since Dame Elizabeth Cadbury sponsored thirteen Serbian refugee children of World War I.

Built in traditional 14th-century Byzantine form by Yugoslavian architect Dr Dragomir Tadic and Bournville Village Trust, it is a replica of a church in Serbia using stone from the same quarries. Completed in 1968, it is of brick and stone with three sets of bronze doors and a candelabrum from Serbia. It has no seats, which is the usual thing for traditional Orthodox churches. Moreover, the interior has a full scheme of traditional Byzantine decoration. The dome contains the image of Christ Pantocrator, and the hemi-dome of the apse contains that of the Virgin Mary. At the bottom of the walls are the warrior saints, above these are patriarchs and priestly saints, and at the top are the apostles and scenes from the twelve major Christian feasts. Not only have these murals been executed in a perfect Byzantine style, but they are painted fresco, meaning that the paint was applied meticulously to wet walls.

The priest serving in the church today is Nenad Popovic.

The cultural centre is a Grade C locally listed building.

All content from Kiddle encyclopedia articles (including the article images and facts) can be freely used under Attribution-ShareAlike license, unless stated otherwise. Cite this article:
Church of the Holy Prince Lazar, Birmingham Facts for Kids. Kiddle Encyclopedia.