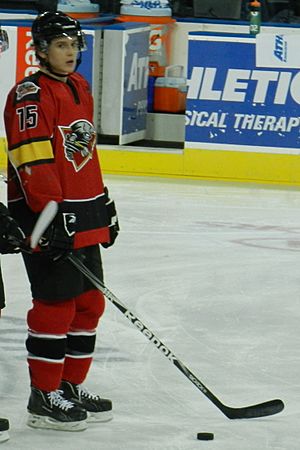 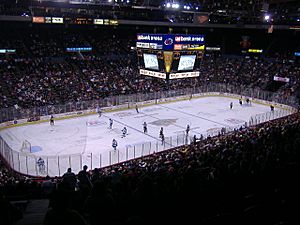 After introducing their current mascot, Twister, in 1995, the Cyclones had always included him in their uniform design. In fact, from 1996–2014 he was the centerpiece of the jerseys they wore. However, prior to the 2014–15 season, the organization did a complete revamp of the uniforms and their colors. Twister was removed from the uniform completely along with the color yellow. The shade of red used was also changed from a darker maroonish style red to a more bright royal red. The logo now is described as being a twister, or cyclone, in the center of a "C" standing for, Cincinnati. The jersey concepts also changed from being a classic hockey style to a more modern era look. The home, away, and alternate jerseys have red shoulders and red stripes that begin at the elbow area and wrap around to the underside of the wrists. The home jerseys are base white with red trim, the away jerseys are base red with black trim, and the alternates are base black with red trim. Other than the change in color, all three jerseys are similar.

All content from Kiddle encyclopedia articles (including the article images and facts) can be freely used under Attribution-ShareAlike license, unless stated otherwise. Cite this article:
Cincinnati Cyclones Facts for Kids. Kiddle Encyclopedia.