The remains of the Roman amphitheatre at Cirencester, in 2002

Cirencester Amphitheatre was a Roman amphitheatre located in Cirencester, Gloucestershire, England. It has been scheduled as an ancient monument.

Archeological digs have uncovered the earthworks, revealing the outline of the construction, which is still visible, with the banking reaching 25 feet from the bottom of the arena. The arena itself is approximately 150 feet (46 m) by 135 feet (41 m). Roman artefacts including coins and pottery have been discovered on the site. It is estimated that it was constructed towards the beginning of the 2nd century. 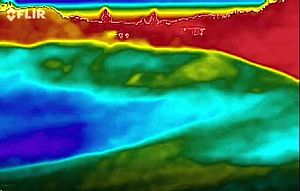 Here is a clearer view of the excavation area on the north-east quadrant. A thermal image captured in darkness.

In Roman Britain, Cirencester was known as Corinium Dobunnorum, and was the second biggest town in Britannia, after Londinium (London). This amphitheatre is also the second largest, which indicates the significance of the location in Roman times. Although only slightly larger in diameter than the amphitheatre in Silchester, it has much higher sides. The earthworks show evidence of tiered wooden seats for around 8000 people, placed upon terraces made of stone, although a timber only structure may have existed before the 2nd century. There are two entrances, located at the North-Eastern and South-Western ends of the stadium.

During the 5th century, when the Western Roman Empire was under attack and soldiers returned to Rome to defend it, the amphitheatre was fortified to defend against the invading Saxons. Wooden structures were erected within the arena itself, placed in postholes, and a portion of the North-Eastern entrance was blocked.

Unlike other amphitheatres, it is aligned in parallel to the streets of the town itself.

It has also been referred to as the 'Bull Ring', because the sport of bull-baiting used to take place there.

In 2012 plans were announced by the Cirencester Town Council to improve access and signage at the site. Further plans for a visitor centre and car park followed in 2014.

All content from Kiddle encyclopedia articles (including the article images and facts) can be freely used under Attribution-ShareAlike license, unless stated otherwise. Cite this article:
Cirencester Amphitheatre Facts for Kids. Kiddle Encyclopedia.