The hawkfishes are strictly tropical, perciform marine fishes of the family Cirrhitidae associated with the coral reefs of the western and eastern Atlantic and Indo-Pacific. They share many morphological features with the scorpionfish of the family Scorpaenidae. 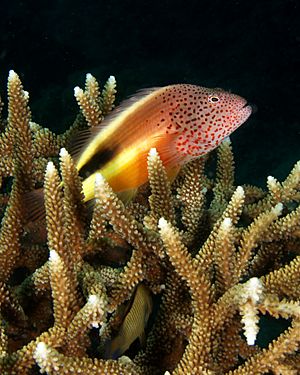 Hawkfishes have large heads with thick, somewhat elongated bodies. Their dorsal fins are merged, with the first consisting of 10 connected spines. At the tip of each spine are several trailing filaments, hence the family name Cirrhitidae, from the Latin cirrus meaning "fringe". Their tail fins are rounded and truncated, and their pectoral fins are enlarged and scaleless. Their scales may be cycloid or ctenoid. Most hawkfishes are small, from about 7–15 cm in length. The largest species, the giant hawkfish (Cirrhitus rivulatus) attains a length of 60 cm and a weight of 4 kg. A commercial fishery exists for the larger species, as they are considered excellent food fishes.

The vibrant colours exhibited by most hawkfishes have won them popularity in the aquarium hobby, aided by the fishes' reputation for unproblematic upkeep and easy acclimation to tank life. Popularly kept species include the longnose hawkfish (Oxycirrhites typus), which is coloured in a red and pink crosshatch pattern, and the flame hawkfish (Neocirrhites armatus).

Because of their large, skinless pectoral fins, hawkfishes are able to perch upon fire corals without incurring harm. Actually hydrozoans rather than true corals, fire corals possess stinging cells (nematocysts), which would normally prevent close contact. Afforded some degree of protection by their living perches, hawkfishes seek the high ground of the reef, where they warily survey their surroundings like hawks. This is said to have inspired their common name.

Most hawkfishes are solitary in nature, but some will form pairs and share a head of coral. Other species form harems of up to seven females dominated by a larger male. They are diurnal, and remain within the shallows of the reef, no deeper than 30 m. Typically motionless, hawkfishes will dart out to grab crustaceans and other small invertebrates which happen to pass by.

Spawning occurs at night, at or near the water's surface. Hawkfishes are pelagic spawners; they release many tiny buoyant eggs which drift with the ocean currents until hatching. Hatching is thought to happen after about three weeks; the distance travelled in this time may explain their exceptionally wide distribution. They have not been successfully bred in the aquarium, with the exception of the longnose hawkfish.

Hawkfishes are noted for their protogynous hermaphrodism; functional females will change into males if the dominant supermale dies. Hawkfishes are generally not sexually dichromatic, meaning the sexes cannot be distinguished by coloration alone.

All content from Kiddle encyclopedia articles (including the article images and facts) can be freely used under Attribution-ShareAlike license, unless stated otherwise. Cite this article:
Cirrhitidae Facts for Kids. Kiddle Encyclopedia.