The arc-eye hawkfish (Paracirrhites arcatus) is a species of hawkfish belonging to the genus Paracirrhites. It is found in shallow waters in the tropical IndoPacific on reefs, resting on coral heads much of the time.

The genus name Paracirrhites derives from the Greek word para, meaning "the side of" plus the Latin word cirrus, meaning "curl". The species name arcatus, meaning "arched", refers to the U-shaped marking around the eyes.

Paracirrhites arcatus grows to a maximum size of 20 cm in length, and occurs in a variety of colors. The body may be greenish-brown, dark brown or reddish-orange, while the tail usually is bluish. A broad, longitudinal white band runs along the distal half of the body. A characteristic ring-shaped or U-shaped tricolor marking (red, blue and yellow) occurs around and behind the eyes. The dorsal fin has ten spines and eleven soft rays, and the anal fin has three spines and six soft rays. These voracious predators are very territorial. They spend most of their time perched on corals, especially Acropora, Stylophora, and Pocillopora genera, waiting for prey to approach too close. They mostly feed on small fishes, shrimps, and crabs but also eat isopods, fish eggs and larvae. These fish occasionally find their way into the aquarium trade.

The arc-eye hawkfish is widespread in the tropical Indo-Pacific. Its range extends from East Africa, Madagascar and the Maldives to Hawaii, southern Japan and western, northern and eastern Australia. 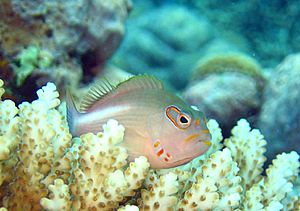 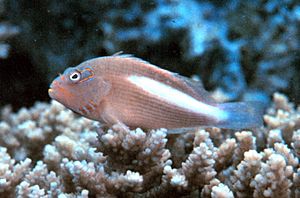 All content from Kiddle encyclopedia articles (including the article images and facts) can be freely used under Attribution-ShareAlike license, unless stated otherwise. Cite this article:
Arc-eye hawkfish Facts for Kids. Kiddle Encyclopedia.