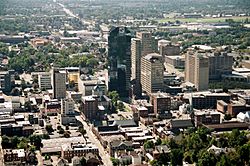 A portion of downtown Lexington in 2006. 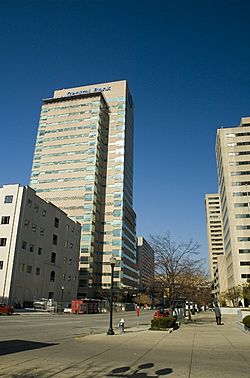 The urban development patterns of Lexington, Kentucky, confined within an urban growth boundary that protects its famed horse farms, include greenbelts and expanses of land between it and the surrounding towns. This has been done to preserve the region's horse farms and the unique Bluegrass landscape, which bring millions of dollars to the city through the horse industry and tourism. Urban growth is also tightly restricted in the adjacent counties, with the exception of Jessamine County, with development only allowed inside existing city limits. In order to prevent rural subdivisions and large homes on expansive lots from consuming the Bluegrass landscape, Fayette and all surrounding counties have minimum lot size requirements, which range from 10 acres (40,000 m2) in Jessamine to fifty in Fayette.

Because the farmland in the southern part of the county consisted more of tobacco farms than pastures for raising horses and thus was considered "replaceable", most of Lexington's growth has been historically concentrated south of the downtown area. As a result, more than seventy percent of today's population lives south of US 60. Until the mid-1990s, most of the growth occurred in the southwest between US 68 (Harrodsburg Road) and KY 1974 (Tates Creek Road). Today, new development continues to the Madison and Clark County lines in a southeasterly direction along the Interstate 75 and US 60 (Winchester Road) corridors. Of the surrounding counties, the greatest growth is occurring in the counties through which Interstate 75 and US 27 pass, such as Scott County, Madison County and Jessamine County. Clark County and Woodford County are experiencing moderate growth, and Bourbon County is stagnant, with almost no growth. More recently, growth has begun to leapfrog the adjacent counties, with rapid increases in suburban development in Anderson County, to the west of Woodford County along the Bluegrass Parkway and also in the commuter belt of the state capital of Frankfort; and Garrard County, to the south of Jessamine along US 27.

In addition to rampant suburban growth, downtown Lexington is seeing a large building boom, with the revitalization of many historical structures and the construction of many new ones. Much of the development utilizes urban infill techniques such as the filling in of parking lots and high-density or out-of-character structures. Several new projects, such as South Hill Station Lofts and University Lofts, are taking advantage of now-disused tobacco warehouses along the South Broadway corridor. 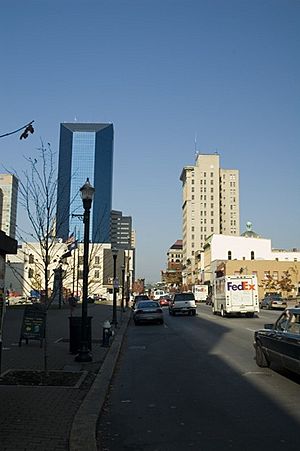 Looking down East Main Street in downtown Lexington. The "Big Blue" building on the left is the Lexington Financial Center.

In 1976, the city became a focal point for entertainment and businesses alike when the Lexington Center opened at Vine, Main, High Streets and Broadway. Incorporating a convention center, Rupp Arena, a shopping mall, and the Hyatt Regency Hotel into one large development parcel, it was the largest development of its kind in the United States when it was completed.

In 1979, the 22 story Kincaid Towers highrise at Vine and Broadway was completed. This modern structure would remain the tallest building in central Kentucky for the next eight years. Upon completion, it was home to Kentucky Central Insurance Companies, but today it houses Central Bank among other corporations.

In 1987, the tallest structure in Lexington was completed. The Lexington Financial Center, a 410 feet (125 m), 31 floor highrise that was completed on a site bounded by South Mill, Main and Vine Streets. It currently houses the regional headquarters of Fifth Third Bank among other financial institutions and is located between Main and Vine Street.

Also during 1987, Park Plaza, a 202 unit 22 story residential high-rise between Main and Vine Streets, adjacent to Phoenix Park and S. Limestone Street, opened. It features an eight-story parking garage and is connected to the Lexington Public Library. Park Plaza was completed in 1987 while the five story library was completed in 1988. It was constructed on the site of the former Phoenix Hotel that was demolished by Wallace Wilkinson for the World Coal Center. When that idea failed, he constructed what is now Park Plaza and the new Phoenix Park. 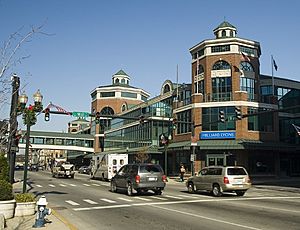 In 1980, the new office and production plant of the Lexington Herald-Leader was completed at the east end of downtown at Midland, Vine and East Main streets. The near-160,000-square-foot (15,000 m2) facility is on a 6-acre (24,000 m2) plot, with large windows that offer an interior glimpse at the massive printing presses and other industrial equipment.

In 1985, the Lexington Chamber of Commerce relocated to 330 East Main Street along what is now Rose Street. The three-story glass and granite structure, completed for $2.1 million, was a construction project by the Webb Cos.; it was formerly a Kentucky Central Life Insurance Co. parking lot. The West Vine Place office tower was also completed that year, featuring a polished granite facade along West Vine Street near the corner of South Limestone. During that year, renovations to an entire block of historic structures was completed; it was named Victorian Square and contains upscale restaurants, clothing shops, and art galleries.

In 1986, Festival Market opened. Today it is known as the Triangle Center. Originally envisioned as a shopping and dining complex, it now houses offices along with several restaurants and a coffee shop. 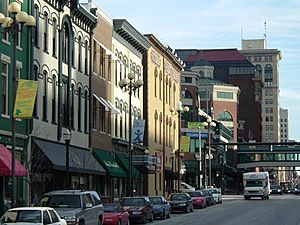 In 1987, developers announced that the former Ades Dry Goods Building at 249 East Main Street, was to become a mixed-use development parcel. The "experiment in Manhattan-style living" culminated in the renovation of the existing structure. Renovations began in January 1988 with a $1.2 million Urban Development Action Grant, with the city providing $240,000 towards the project; the remainder of the $5.7 million project consisted of "bank loans and private equity." Retail space, now home to an upscale restaurant, was located on the first floor, while professional offices were located on the second and third floors. Loft apartments were constructed on the fourth floor.

The Government Center parking garage, adjacent to the Lexington-Fayette Urban County Government building, is speculated to have been an office structure or a storage facility but later converted into a parking garage. The garage is estimated to be over 50 years old, and suffering from structural ailments, such as steel corrosion and other deterioration. The estimated cost to repair the facility is between $1 million and $1.5 million.

One major project that was only partially realized was the Lexington Transit Center development, which was to include a residential apartment structure on top between High and Vine Streets. Financing problems had tabled the project until fairly recently, when new discussions took place for a new apartment and retail complex at the same site. Another structure never completed as originally conceived was the Galleria. It was a proposed 24 level glass skyscraper that would have included retail shops and offices. It would have been constructed around the Blue Grass Shade Company at 124 South Mill and McAdams and Morford Drugs at 200 West Main Street. The project, initiated in 1983, was never constructed. 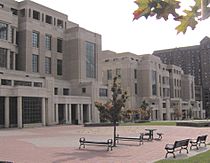 The Robert F. Stephens Courthouse was constructed on the proposed site of the Ben Ali Apartments

Another tabled project was the Ben Ali Apartments complex; financing problems had also killed the project. The site is part of the land occupied by the Fayette County Courthouse today. Gameday Center was a fairly recent project that was planned to anchor the South Broadway corridor, however, land compatibility issues prevented this project.

The largest failed development was the World Coal Center. The Phoenix Hotel was demolished in preparation for the skyscraper, however, it was never constructed; for years a pile of rubble stood marking the site.

One ambitious project that was never completed was the Lexington Sky Bridge Plaza. Proposed on October 11, 1984, it never progressed further than the design phases. Envisioned by two University of Kentucky professors, the civic space would have been located 14.5 feet (4.4 m) above the Harrison Avenue viaduct (now Martin Luther King Drive), and would have included a bandstand for live music, an outdoor cafe with meeting space, and a display area for local art scene. It would have included provisions for an ice-skating rink. The facility would have been constructed on four concrete piers that extend upward from the existing viaduct with two steel trusses and concrete brace supports. It was loosely modeled after the Belvedere along Interstate 64 in Louisville, Kentucky and Fountain Square in Cincinnati, Ohio. 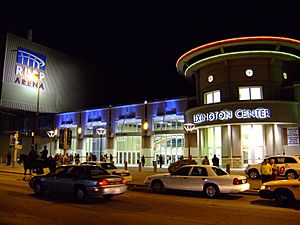 Rupp Arena and the Lexington Center

As the cost of land within the urban service boundary of Fayette County increases due to the diminishing amount of plots appropriate for development, and as people's interest in living downtown has seen a resurgence, several new projects are either in planning, under construction, or have already been finished.

Among the distinctive new developments along Main Street is the 500's on the Main located across from the Lexington Center and adjacent to Victorian Square. It is a residential and commercial project that will feature a tall sweeping spire and a clock, and will encompass an entire city square block. Included will be 10 penthouses, 54 loft condominiums, 12 retail stores, an urban grocery convenience store such as Trader Joe's, and a rooftop restaurant. 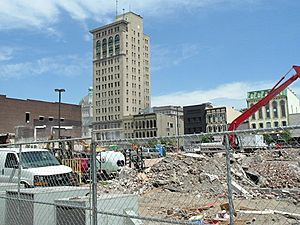 Construction of Fairmont on Main, a luxury townhouse development in the 600 block of West Main Street, began in 2004 and was completed in 2006. Across the street is NewPast on Main, an environmentally friendly loft project that follows the "EarthCraft" guidelines. The project features "sustainably manufactured materials, energy efficient systems, resource efficient building materials, geothermal heating and cooling, and passive solar design techniques." Fourteen new loft condominiums, three renovated lofts, and a gate house are part of this project.

Construction on Main+Rose was completed in 2007, featuring 96 residential condominiums with 25,000 square feet (2,300 m2) for retail ventures including Jimmy John's and Dunkin' Donuts. The site, at 337 East Main, was formerly the Downtown Motor Inn, abandoned in the mid-1980s. It was slated to become a Days Inn franchise.

In 2006 renovation and new construction began on the Nunn Building. The Nunn Building was originally constructed in 1917 for the Lexington Herald. The original structure has been remodeled with a new addition completed in 2007 to provide 26 residential lofts condominiums.

The Chevy Chase district, centered around the intersection of East High Street, Euclid Avenue, and Fontaine Road, hosts a collection of small boutique shops, restaurants, and a television station. It contains notable structures such as the Ashland Plaza buildings and many stately homes, along with new development projects such as the Mark Lofts. Located at the corner of East High Street and Woodland Avenue, it will contain 36 units and ground-level offices and retail. Construction began in the summer of 2006 and is expected to be completed in the fall of 2007.

The district is also home to one unique development project that was proposed but never constructed. The nine-story Chevy Plaza and Chevy Chase Plaza were to be located along East High Street at Euclid Avenue and South Ashland Avenue where WDKY-TV and numerous other shops are located today. The $25 million project, proposed in March 1984, would have included residential and commercial spaces into a nearly two-block footprint.

The area has a community magazine, titled the Chevy Chaser Magazine. 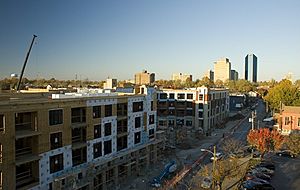 CenterCourt under construction in November 2006.

CenterCourt is located within the "College Town" district adjacent to the University of Kentucky and is geared towards university faculty and other professionals. It is a four floor commercial and residential development located along South Upper Street at Bolivar Street. Shelbourne Plaza, currently being constructed along South Broadway, will feature an urban grocery store. The project is not scheduled for completion until 2009, but will feature 230 residential units and 80,000 square feet (7,000 m2) of retail space.

All content from Kiddle encyclopedia articles (including the article images and facts) can be freely used under Attribution-ShareAlike license, unless stated otherwise. Cite this article:
Cityscape of Lexington, Kentucky Facts for Kids. Kiddle Encyclopedia.