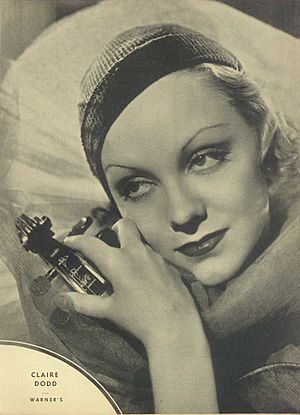 Dorothy Arlene "Claire" Dodd (December 29, 1911 - November 23, 1973) was an American actress. She had a short acting career. She acted in several movies. She played secretary Della Street in The Case of the Curious Bride and The Case of the Velvet Claws.

Dodd was born in central Iowa. She died from cancer in Beverly Hills, California.

All content from Kiddle encyclopedia articles (including the article images and facts) can be freely used under Attribution-ShareAlike license, unless stated otherwise. Cite this article:
Claire Dodd Facts for Kids. Kiddle Encyclopedia.