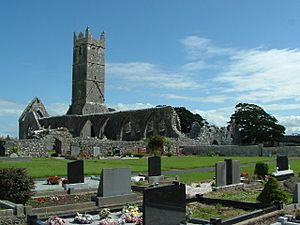 The Claregalway Friary, viewed from the modern cemetery to its north 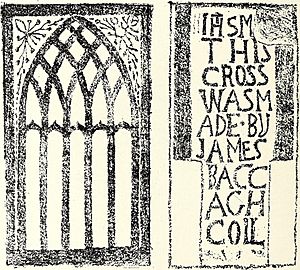 The Claregalway Friary is a medieval Franciscan abbey located in the town of Claregalway, County Galway, Ireland.

The abbey site features an east-facing, cruciform church (minus a south transept) with a 24-metre (80 ft) bell tower. The ruins of the living quarters and cloister are situated to the south of the church building. 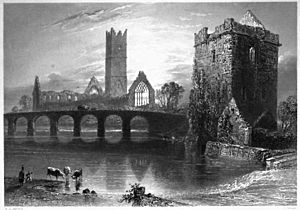 A 19th-century view showing the abbey, the old bridge and the tower

The monastery was commissioned in about 1252 by John de Cogan, a Norman knight who took possession of the area following the Norman conquest of Connacht.

The Franciscan community at the abbey lived under the patronage of the de Cogan clan until 1327, when John Magnus de Cogan gave them the building and surrounding lands. In return for this favour, the monks were asked to present a rose to de Cogan and his descendants on the annual feast day of St. John the Baptist (24 June).

The community flourished until the mid-16th century, when the English Reformation disrupted the Catholic establishment in Ireland. From that time on, the monks of Claregalway struggled to keep the abbey viable against political and economic forces. 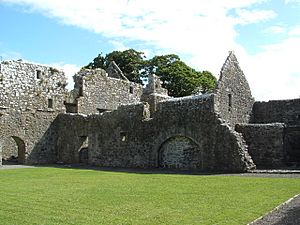 The cloister within the abbey ruins

On 11 July 1538, forces under the command of Lord Leonard Gray ransacked and looted the abbey while on march to Galway. In 1570, Queen Elizabeth I granted possession of the monastery to Sir Richard de Burgo. In 1589, the monastery buildings were turned into a barracks under the administration of the English provincial governor, Sir Richard Bingham.

During the reign of King James, the property was given to the Earl of Clanrickarde. By 1641, the Franciscans had reoccupied the abbey, but the building was in poor repair and the community lacked the ability to renovate it.

In 1731, Edward Synge, Anglican archbishop of Tuam recorded that "there is a friary in Claregalway, where three at least are always resident." The High Sheriff of the county, Stratford Eyre, reported in 1732 that the monks "lived close" to the abbey. 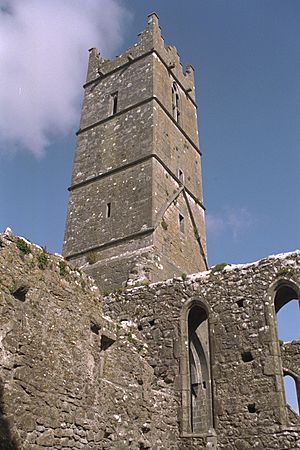 Church records indicate that the community numbered about 220 religious in 1766, but this number had declined to about 150 by 1782. French diplomat Coquebert de Montbret wrote in 1791 that "the monks are settling down among the ruins." 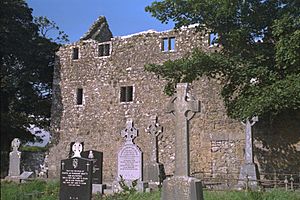 The remains of the friary's living quarters

The size of the community continued to dwindle. By 1838, it was down to only two members. Archives of the Galway Vindicator, a local newspaper, indicate that the community's last two monks departed for a larger community in Galway in November 1847. For some years after the monastery closed, members of the Galway friary continued to travel to the site on feast days to celebrate Mass and hear confession, but these activities had ceased by 1860.

In 1892, a Lord Clanmorris donated the property to the Commissioner of Public Works under the provisions of the Ancient Monuments Act of 1882.

Today, the abbey buildings and grounds are open to the public free of charge. The burial grounds surrounding the building are maintained and still in use.

All content from Kiddle encyclopedia articles (including the article images and facts) can be freely used under Attribution-ShareAlike license, unless stated otherwise. Cite this article:
Claregalway Friary Facts for Kids. Kiddle Encyclopedia.