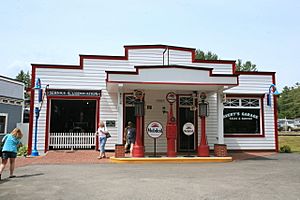 Avery's Garage at Clark's Bears, known as Clark's Trading Post at the time the picture was taken

Clark's Bears, previously named Clark's Trading Post, is a visitor attraction in Lincoln, New Hampshire, United States, in the White Mountains. It is known for its trained bears and for the White Mountain Central Railroad, a 30-minute, 2.5-mile (4.0 km) steam-powered train ride.

The attraction is located along U.S. Route 3, 1 mile (1.6 km) north of the village of North Woodstock and 9 miles (14 km) south of Franconia Notch.

The property opened as a roadside stand in 1928 known as "Ed Clark's Eskimo Sled Dog Ranch", selling souvenirs and allowing visitors to view Florence and Ed Clark's Labrador sled dogs. The Clarks purchased their first black bear in 1931, and Florence and Ed's sons Edward and Murray began training the bears in 1949.

In the 1950s, the Clark brothers began salvaging old steam locomotives and displaying them at the Trading Post. This led to the construction of the White Mountain Central Railroad, a purpose built tourist railroad with a standard gauge track. Construction on the railroad began in 1955 and the first train ride was on July 30, 1958. The 30-minute train ride includes an appearance by the Wolfman, a wild prospector protecting his unobtainium mine, who harasses the train passengers. The current train ride is powered during most of the season by a Climax steam locomotive and mid-weeks during fall foliage season by a 1943 GE diesel locomotive. The train's route includes a 1904 Howe truss covered bridge that was dismantled from East Montpelier, Vermont, and reassembled across the Pemigewasset River at the Trading Post.

All content from Kiddle encyclopedia articles (including the article images and facts) can be freely used under Attribution-ShareAlike license, unless stated otherwise. Cite this article:
Clark's Bears Facts for Kids. Kiddle Encyclopedia.