Clarksburg is a census-designated place and an unincorporated area in northern Montgomery County, Maryland, United States. It is located at the northern end of the Interstate 270 technology corridor, approximately four miles north of Germantown. As of the 2020 census, Clarksburg had a population of 29,051. 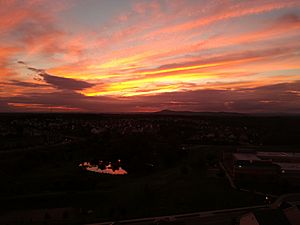 Clarksburg is named for trader John Clarke, and was established at the intersection of the main road between Georgetown and Frederick and an old Seneca trail. One of its earliest white inhabitants was a man named Michael Ashford Dowden, who in 1752 received a patent for 40 acres (160,000 m2) from the colonial government called "Hammer Hill", and two years later permission to build an inn. The inn itself is a footnote in history, hosting the army of General Edward Braddock during the French and Indian War, serving as a meeting place for local Sons of Liberty in the years before the American Revolution, and possibly serving dinner to President Andrew Jackson on his way to his inauguration. Jamie, grandson of the trader, built a general store in the area around 1770, and over the next thirty years enough people moved to the area that Clark was appointed postmaster for the community. By 1875, Clarksburg was a major town in the northern part of the county, but the construction of the Baltimore and Ohio Railroad undermined its economy.

In 1964, the Montgomery County planning commission decided that Clarksburg would be the last community along Interstate 270 that would have large-scale development. The Montgomery County Council adopted a master plan for Clarksburg in 1968, which rezoned land for a mix of townhouses and single-family houses. Another master plan was adopted in 1994. A retail area was planned to be built in Clarksburg, but retail development had not broken ground by 2010, to the dismay of some residents. A Harris Teeter-anchored shopping center opened in 2013, and a large outlet mall opened in October 2016.

In June 2015, the Clarksburg Chamber of Commerce selected the town's flag designed by Shaneea Peek as the official flag of Clarksburg.The inspiration of the flag was derived from Dowden’s Ordinary which is a historic landmark of Clarksburg.

Since 2000 there has been major growth in the area of Clarksburg. A new town center is being built in the heart of Clarksburg, near the historic center. 2010 Census data show that there are now over 13,677 residents and 4,352 households currently residing in Clarksburg, which consists of a diverse population with a high level of education attainment. Several public parks and schools have also been developed to help accommodate the growth. In recent years it was discovered that many new houses have had been built closer together than the minimum distance required by zoning laws, roads built too narrow for firetrucks to pass, homes and community facilities built without adequate permits or approvals by local authorities. This was found to be the fault of inadequate county oversight and lax enforcement of building codes and laws combined with a building boom in the early 2000s.

Clarksburg has a park and children's playground named Park Daniel, and Little Bennett Regional park is nearby.

The two newest schools, Little Bennett Elementary School and Clarksburg High School, have the largest increase of students, with Little Bennett at 71.4% above building capacity in the projections of 2011-2012. This has led to a moratorium in issuance of permits for new projects, but not issuance of permits in existing projects, for new homes in the Clarksburg area. The majority of planned housing units will be built in existing projects. All four of the largest neighborhoods are exempt from the moratorium.

All content from Kiddle encyclopedia articles (including the article images and facts) can be freely used under Attribution-ShareAlike license, unless stated otherwise. Cite this article:
Clarksburg, Maryland Facts for Kids. Kiddle Encyclopedia.