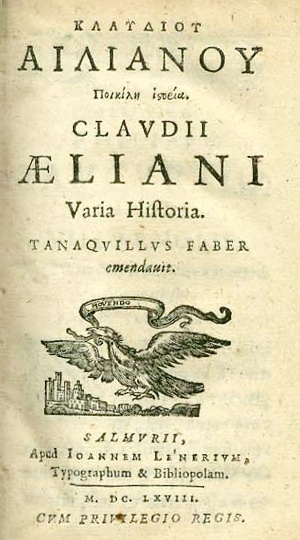 Title page of Varia Historia, from the 1668 edition by Tanaquil Faber

Claudius Aelianus (Greek: Κλαύδιος Αἰλιανός; c. 175 – c. 235 CE), commonly Aelian, born at Praeneste, was a Roman author and teacher of rhetoric who flourished under Septimius Severus and probably outlived Elagabalus, who died in 222. He spoke Greek so perfectly that he was called "honey-tongued" (meliglossos); Roman-born, he preferred Greek authors, and wrote in a slightly archaizing Greek himself.

His two chief works are valuable for the numerous quotations from the works of earlier authors, which are otherwise lost, and for the surprising lore, which offers unexpected glimpses into the Greco-Roman world-view.

He was born around the year 170. He died after 220. Even though he was from Rome, he wrote in Greek. In English, he is often referred to as Aelian.

All content from Kiddle encyclopedia articles (including the article images and facts) can be freely used under Attribution-ShareAlike license, unless stated otherwise. Cite this article:
Claudius Aelianus Facts for Kids. Kiddle Encyclopedia.