Climate of London facts for kids 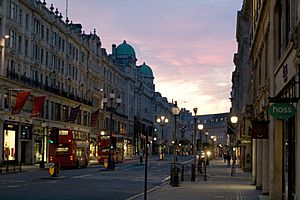 London, the capital and largest city in England and the United Kingdom has a temperate oceanic climate, with regular but generally light precipitation throughout the year. Summer temperatures rarely rise much above 30 °C (86 °F), though higher temperatures have become more common recently. The highest temperature ever recorded in London was 38.1 °C (100.6 °F), measured at Kew Gardens during the European Heat Wave of 2003. In modern times, heavy snowfalls have been infrequent with snow generally only settling once or twice each winter and accumulations usually of no more than an inch (2.5 cm) or so. Despite its reputation as being a rainy city, London receives less precipitation (601 mm (24 in) in a year), than Rome, Bordeaux, Toulouse, Naples and less than half the precipitation of Sydney. This is despite the fact that sub-tropical regions usually receive fewer rainy or overcast days. London's large built-up area creates a microclimate (an "urban heat island"), with heat stored by the city's buildings. Sometimes temperatures are 5 °C (9 °F) warmer in the city than in the surrounding areas.

Heathrow - Airport Weather Station in the suburbs of West London

The weather station enclosure is the most elevated of any in the London area, and as a result daytime temperatures are typically one degree lower than Heathrow, Kew, Northolt and Greenwich.

Northolt - Airfield Weather Station in the North West of London

All content from Kiddle encyclopedia articles (including the article images and facts) can be freely used under Attribution-ShareAlike license, unless stated otherwise. Cite this article:
Climate of London Facts for Kids. Kiddle Encyclopedia.