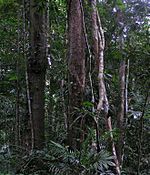 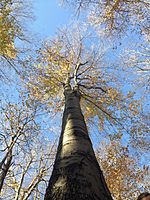 In ecology, climax community, or climatic climax community, is a historic term for a biological community of plants, animals, and fungi which, through the process of ecological succession in the development of vegetation in an area over time, have reached a steady state.

This equilibrium was thought to occur because the climax community is composed of species best adapted to average conditions in that area. The term is sometimes also applied in soil development.

The idea of a single climatic climax, which is defined in relation to regional climate, originated with Frederic Clements in the early 1900s. The first analysis of succession as leading to something like a climax was written by Henry Cowles in 1899, but it was Clements who used the term "climax" to describe the idealized endpoint of succession.

All content from Kiddle encyclopedia articles (including the article images and facts) can be freely used under Attribution-ShareAlike license, unless stated otherwise. Cite this article:
Climax vegetation Facts for Kids. Kiddle Encyclopedia.