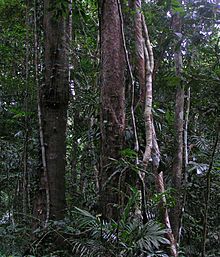 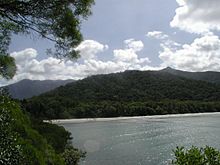 The Daintree Rainforest is a main part of the Wet Tropics of Queensland, listed as a UNESCO World Heritage Site in 1988.

The Daintree Rainforest contains 30% of the frog, marsupial and reptile species in Australia, and 65% of Australia's bat and butterfly species. 18% of bird species in the country can be found in this area. There are also over 12,000 species of insects. All of this diversity is contained within an area that takes up 0.2% of Australia.

The Daintree Rainforest is extremely ancient; it is thought to be over one hundred and thirty-five million years old. About 430 species of birds live among the trees. The primitive flowering plants Austrobaileya scandens and Idiospermum australiense are also endemic to the Daintree.

The Daintree Rainforest is loosely defined as the area between the Mossman Gorge and the Bloomfield River. The roads north of the Daintree River wind through areas of lush forest, and have been designed to minimize impacts on the forest.

The Daintree Region is home to a number of rare and endangered species, including the southern cassowary and Bennett's tree-kangaroo. Other animals include the saltwater crocodile and the musky rat-kangaroo.

The rainforest also holds many ancient plants which have survived from the southern supercontinent Gondwana.

All content from Kiddle encyclopedia articles (including the article images and facts) can be freely used under Attribution-ShareAlike license, unless stated otherwise. Cite this article:
Daintree Rainforest Facts for Kids. Kiddle Encyclopedia.