The Queensland tropical rain forests ecoregion (WWF ID:AA0117) covers a portion of the coast of Queensland in northeastern Australia and belonging to the Australasian realm. The forest contains the world's best living record of the major stages in the evolutionary history of the world’s land plants, including most of the world's relict species of plants from the ancient supercontinent of Gondwana. The history of the evolution of marsupials and songbirds is also well represented.

The ecoregion covers 32,700 square kilometers (12,600 sq mi) of northeastern coastal Queensland, from the coast up a series of plateaus and tablelands to the mountains behind the coast. The ecoregion comprises three separate sections. The northern area, which includes Cairns, is the largest, from 15°30’ to 19°25’ south latitude. This northern section is also known as the Wet Tropics bioregion, and is just east of the Einasleigh Uplands. The middle section is centered on Mackay, Queensland, and the southern section is just south of Shoalwater Bay. These latter two sections are bounded on the west by the Brigalow tropical savanna ecoregion. Elevations in the ecoregion rise from sea level to 1,477 meters, with a mean of 301 meters.

The climate of the ecoregion is Dry-winter humid subtropical climate (Köppen climate classification (Cwa)). This climate is characterized as having no month averaging below 0 °C (32 °F), at least one month averaging above 22 °C (72 °F), and four months averaging over 10 °C (50 °F). Precipitation in the wet summer months is ten time or more the average of the winter months. In this particular ecoregion, annual precipitation is highly variable, with annual averages between 1,200 and 8,000 mm. The rainy season is November to April.

The Queensland tropical rain forests are designated one of the Global 200 ecoregions. The ecoregion is the largest remnant of Australia's rain forest flora, home to ancient assemblage of plants, called the Antarctic flora, presently characteristic of New Zealand and southern Chile. Fossil pollen records indicate closed forest covered most of Australia between 50 and 100 million years ago. These forests represent the closest living remnant of the vegetation type from which all of Australia's unique vegetation developed. The vegetation remained across Australia and Antarctica until about 15 million years ago. 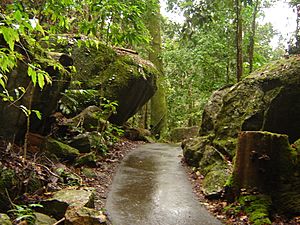 Typical scenery in the Wet Tropics, a walking path with fauna at Josephine Falls, located near Innisfail. Foliage is thin in the photograph due to Cyclone Larry's effects.

Currently, about 65% of the ecoregion is closed forest of broadleaf evergreens. Conifers of the southern hemisphere family Araucariaceae are the characteristic tree species. In the northern section of the ecoregion, Kauri commonly form the forest canopy, with Agathis robusta most common at lower elevations, and A. microstachya and A. atropurpurea predominant at higher elevations. In the southern sections, Araucaria cunninghamii is predominant, with Araucaria bidwillii dominant in two small areas. Conifers in the family Podocarpaceae are also present, including genera Podocarpus and Sundacarpus. The forests are thick with vines, ferns, epiphytes, and palms. 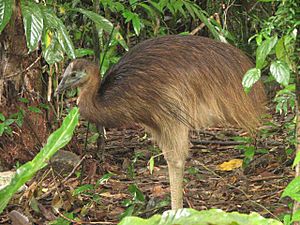 Young cassowary in the Daintree Rainforest

Animal biodiversity is high, also. 672 species of terrestrial vertebrates have been recorded in the ecoregion, 370 species of birds, 70 species of reptile, and 78 species of freshwater fish (of Australia's total of 180 fish species). 11% of the vertebrates are endemic to the region, and 22% of the reptiles. Most of the endemic species live about 400 meters in the rainforest.

These forests are particularly interesting because of their southern location and the high degree of endemism of their plant and animal species. Deforestation caused by logging, road building and farming has led to habitat fragmentation and diminishing populations of species such as spotted-tailed quoll (Dasyurus maculatus), cassowary (Casuarius casuarius), and ring-tail possum (Hemibelideus lemuroides). Introduced species also pose a serious threat to many native species.

In an effort to preserve the Daintree Rainforest north of the Daintree River it was decided by the Government of Queensland in 1993 to halt the spread of the electricity network north of that point, providing a limit to tourist development.

Protected areas include the following: 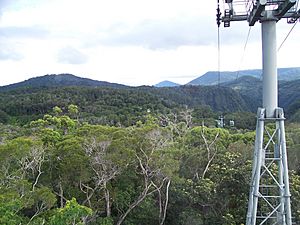 View from the Skyrail Rainforest Cableway, 2004

The forests, together with the Great Barrier Reef, have been identified and promoted as a major tourist attraction of Tropical North Queensland, one of five within the state. One of the most significant tourist attractions in the rain forests is the Skyrail Rainforest Cableway.

All content from Kiddle encyclopedia articles (including the article images and facts) can be freely used under Attribution-ShareAlike license, unless stated otherwise. Cite this article:
Queensland tropical rain forests Facts for Kids. Kiddle Encyclopedia.