Wooroonooran [Aboriginal - "Black Rock"] is a national park in Queensland (Australia), 1367 km northwest of Brisbane, between Innisfail and Cairns.

The park is one of the Wet Tropics World Heritage Area series of national parks, and is a gazetted World Heritage site. Declared in 1988, the World Heritage area stretches from Townsville in the south to Cooktown in the north, and contains some of the oldest surviving rainforests in the world.

The national park covers most of Bellenden Ker Range and includes Queensland's two highest mountains, Mount Bartle Frere (1622 m) and Mount Bellenden Ker (1592 m). Walshs Pyramid at 922 m in height, is located just south of Gordonvale and is one of the highest free-standing natural pyramids in the world. It also includes the parts of Australia that on average receive the most rainfall each year.

The park has two sections: the Palmerston and the Josephine sections. Both the North and South branches of the Johnstone River flow through the Palmerston section. 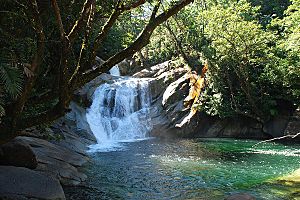 The Josephine Falls visitor area was developed and opened to the public in the 1970s. The water in Josephine Creek originates from the slopes of Mount Bartle Frere and flows into the Russell River. A 600 m walking track leads through rainforest to recently constructed platforms which allow safe viewing of the falls. Several people have been injured and killed in the falls as the granite rocks are extremely slippery so access to the top pool beyond the platforms is prohibited. Living around the falls area is the endemic Bartle Frere skink.

Nandroya Falls may be accessed from a walking track originating at Henrietta Creek Campground. The walk is 2.2 km by the shortest route. At Nandroya Falls, the Douglas Creek drops in a narrow, uninterrupted, 50 metre fall from a basalt parapet. There is also a second shorter and wider tumble. Silver Creek Falls is also visible from the track.

Whites Falls are found on Behana Creek, above Clamshell Falls.

Kearneys Falls are found in the Goldsborough Valley section of Wooroonooran National Park.

Rainforests in the park contain more than 500 different tree species. The high-altitude areas contain Australia's only native species of rhododendron. The park forms part of the Wooroonooran Important Bird Area, identified as such by BirdLife International because it supports populations of a range of bird species endemic to Queensland's Wet Tropics. 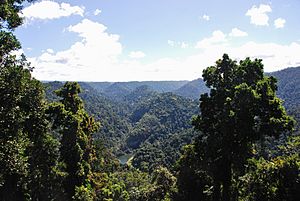 View from the Mamu Tropical Skywalk of Wooroonoon Park, 2017

In 2007 to 2008 the Mamu Rainforest Tropical Skywalk was constructed by the Queensland Parks and Wildlife Service. The work was contracted to Hutchinson Builders Pty Ltd.

Camping is permitted in a campground along Henrietta Creek. Bush camping is allowed along the Mount Bartle Frere Trail but no facilities are provided. Permits are required.

All content from Kiddle encyclopedia articles (including the article images and facts) can be freely used under Attribution-ShareAlike license, unless stated otherwise. Cite this article:
Wooroonooran National Park Facts for Kids. Kiddle Encyclopedia.