The small town of Clive is located ten kilometres from the city centres of both Napier and Hastings in the Hawke's Bay region of New Zealand's North Island. It is close to the mouth of the Ngaruroro River. 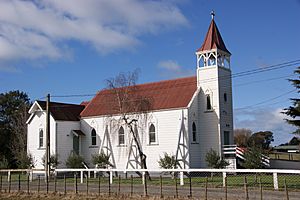 The decommissioned Catholic church in Clive

The town, which has a population of 1764 at the 2013 census, is part of the Hastings district. It was named (like many of the towns in the vicinity) after a prominent person from imperial India, in this case Robert Clive, better known as "Clive of India". The name was given by John Curling.

The town of Clive is mainly rural, yet with the increasing number of people moving into Hawke's Bay, and Clive being at the meeting point of Hastings and Napier, new subdivisions are being built to accommodate the growing population.

All content from Kiddle encyclopedia articles (including the article images and facts) can be freely used under Attribution-ShareAlike license, unless stated otherwise. Cite this article:
Clive, New Zealand Facts for Kids. Kiddle Encyclopedia.