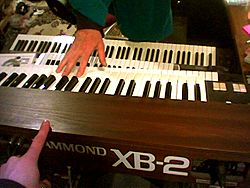 The Hammond XB-2 recreates the sound of the vintage electromechanical Hammond organs in a much lighter, smaller keyboard that uses electronic circuits to reproduce the sound of the spinning tonewheels.

"Clonewheel organ" is a jargon term used to refer to an electronic musical instrument that emulates (or "clones") the sound of the electromechanical tonewheel-based organs formerly manufactured by Hammond. The first generation of clonewheel organs used synthesizer voices, which were not able to accurately reproduce the Hammond sound. In the 1990s and 2000s, clonewheel organs began using sampling or digital signal processing techniques, which were much better able to capture the nuances of the vintage Hammond sound. 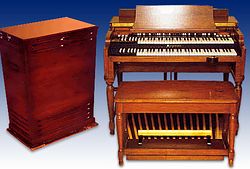 The Hammond organ is an electromechanical organ that was designed and built by Laurens Hammond in 1934. While the Hammond organ was originally sold to churches as a lower-cost alternative to the pipe organ, it came to be used for jazz, blues, and then to a greater extent in rock music (in the 1960s and 1970s) and gospel music.

Transporting the heavy Hammond organ, bass pedalboard (a B-3 organ, bench and pedalboard weighs 425 pounds/193 kg) and Leslie speaker cabinets to performance venues makes it cumbersome for artists to tour with a vintage electromechanical organ. As well, the Hammond, as with all vintage electromechanical instruments, faces the risk of technical problems with the tonewheels or electric motor, which may be difficult to resolve in a touring situation. As such, there was a strong demand among musicians for a way of recreating the Hammond sound in a more portable, reliable fashion.

All content from Kiddle encyclopedia articles (including the article images and facts) can be freely used under Attribution-ShareAlike license, unless stated otherwise. Cite this article:
Clonewheel organ Facts for Kids. Kiddle Encyclopedia.