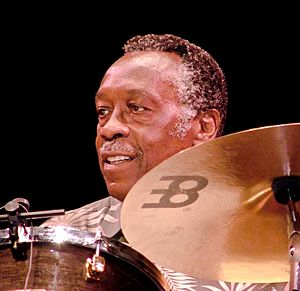 Clyde Stubblefield (April 18, 1943 – February 18, 2017) was an American funk drummer. He began his career around the 1960s. He best known for his work with James Brown. His recordings with James Brown include the singles "Cold Sweat", "There Was a Time", "I Got The Feelin'", "Say It Loud – I'm Black and I'm Proud", "Ain't It Funky Now", "Mother Popcorn", "Get Up, Get Into It, Get Involved". He was born in Chattanooga, Tennessee.

Stubblefield died from kidney failure on February 18, 2017 in Madison, Wisconsin. He was 73.

All content from Kiddle encyclopedia articles (including the article images and facts) can be freely used under Attribution-ShareAlike license, unless stated otherwise. Cite this article:
Clyde Stubblefield Facts for Kids. Kiddle Encyclopedia.