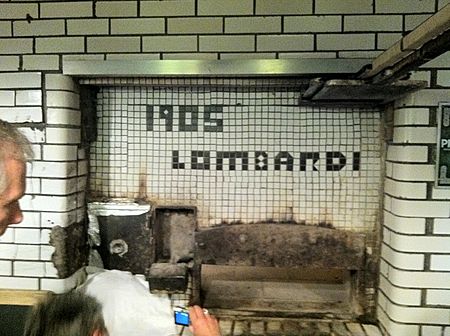 The coal-fired pizza oven at Lombardi's Pizza in Manhattan

Coal Fire Oven has now opened up in Windsor, Ontario, Canada as the only oven in Eastern Canada. It is renowned for their coal fire pizza and wings - The Chelsea Coal Fire Pizza. They are now doing coal fire frozen pizzas too.

The growing popularity of coal-fired pizza in the 2010s was identified as a major market for anthracite coal suppliers, most of whom are in Pennsylvania's Coal Region, who generally see a declining market due to alternate industrial and home heating fuel sources.

Concerns have been raised about particulates, sulfur dioxide and CO2 emissions from coal-fired pizza ovens.

All content from Kiddle encyclopedia articles (including the article images and facts) can be freely used under Attribution-ShareAlike license, unless stated otherwise. Cite this article:
Coal-fired pizza Facts for Kids. Kiddle Encyclopedia.