Coat of Arms of Estonia facts for kids 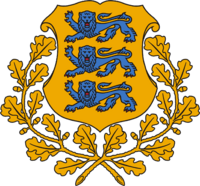 The Greater Coat of Arms

The coat of arms of Estonia is a golden shield which includes three slim, blue leopards (or lions passant guardant) in the middle, with oak branches along the side of the shield.

The coat of arms of Estonia has existed long before they were official recognized after the War of Independence 1918 - 1920, when the Republic of Estonia was internationally recognized.

The symbol has been in use since the 13th century, where the big coat of arms was used for the capital city, Tallinn. The origin of the slim blue lions can be traced back to the King of Denmark at the time, Valdemar the Second. As Denmark was the ruling power of Northern Estonia at the time, it imposed the coat of arms upon the state.

All content from Kiddle encyclopedia articles (including the article images and facts) can be freely used under Attribution-ShareAlike license, unless stated otherwise. Cite this article:
Coat of Arms of Estonia Facts for Kids. Kiddle Encyclopedia.