Coat of Arms of Poland facts for kids 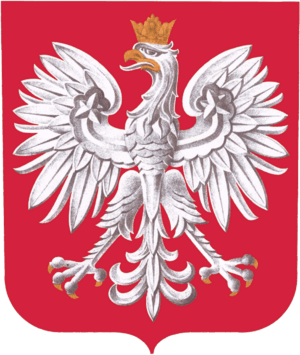 A official Coat of Arms of Poland is the White Eagle with golden crown in its head on red shield.

According to legend, the White Eagle emblem originated when Poland's legendary founder Lech saw a white eagle's nest. When he looked at the bird, a ray of sunshine from the red setting sun fell on its wings, so they appeared tipped with gold, the rest of the eagle was pure white. He was delighted and decided to settle there and placed the eagle on his emblem.

All content from Kiddle encyclopedia articles (including the article images and facts) can be freely used under Attribution-ShareAlike license, unless stated otherwise. Cite this article:
Coat of Arms of Poland Facts for Kids. Kiddle Encyclopedia.