Coat of Arms of Turkmenistan facts for kids 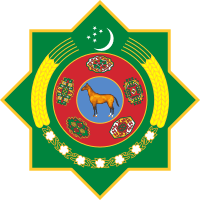 The coat of arms of Turkmenistan was created after Turkmenistan gained independence from the Soviet Union in 1991. The eight-point green starburst (known as the star of Rub El Hizb (۞), a symbol of Islam, to which a majority of Turkmen profess) with golden edges features in its center a red circular disc which carries sheaves of wheat, five carpet guls, and centered upon that a smaller blue circle with a lifelike (rather than heraldized) depiction of an Akhal-Teke horse, a source of pride for the Turkmen people. A variant of the emblem, which included different colors and rounded, was used from 1992 until 2003. [1][2]

The five traditional carpet motifs on the red disc represent the five major tribes or houses, and stand for the traditional and religious values of the country. These Turkmen tribes in traditional order are Teke (Tekke), Yomut (Yomud), Arsary (Ersary), Chowdur (Choudur), and Saryk (Saryq). The Salyr (Salor), a tribe that declined as a result of military defeat before the modern period, are not represented, nor are several smaller tribes or subtribes.

The green and red colors appear in this shield because they have been venerated historically by the Turkmen. The central elements are surrounded by sheaves of wheat that allude to the custom to welcome to guests with salt and bread. Atop the wheat and the red circle appear a waxing crescent moon of white, typical of Turkic symbology, and five five-pointed stars also of white. The waxing crescent moon symbolizes the hope of the country for a shining future and the stars represent the five provinces (Welayatlar) of Turkmenistan-Ahal, Balkan, Dashhowuz, Lebap, and Mary. Most of the elements of the coat of arms are present in the national flag.

Before independence from the USSR, Turkmenistan had a coat of arms similar to all other Soviet Republics. A single carpet gul, not matching any of the tribal patterns, was represented on the Coat of arms of the Turkmen SSR.

All content from Kiddle encyclopedia articles (including the article images and facts) can be freely used under Attribution-ShareAlike license, unless stated otherwise. Cite this article:
Coat of Arms of Turkmenistan Facts for Kids. Kiddle Encyclopedia.