Gabrielle Bonheur "Coco" Chanel (19 August 1883 – 10 January 1971) was a French fashion designer. She was the founder of the House of Chanel. A prolific fashion creator, Chanel also created jewellery, handbags, and fragrances.

She is famous for the little black dress, Chanel No. 5, the most famous women's perfume in the world, and the knee-long skirt and box jacket suit worn with pearl necklace.

She was the only fashion designer to be named on TIME Magazine's 100 most influential people of the 20th century. She broke free of conventions and became a role model for some.

Her behaviour during the German occupation of France in World War II led to criticism.

Gabrielle Bonheur Chanel was born in 1883 to Eugénie Jeanne Devolle Chanel, known as Jeanne, a laundrywoman in the charity hospital run by the Sisters of Providence (a poorhouse) in Saumur, Maine-et-Loire, France. She was Jeanne's second child with Albert Chanel who was an street vendor who peddled work clothes and undergarments living a nomadic life, traveling to and from market towns. The family resided in rundown lodgings.

The couple had six children—Julia, Gabrielle, Alphonse (the first boy, born 1885), Antoinette (born 1887), Lucien, and Augustin (who died at six months)—and lived crowded into a one-room lodging in the town of Brive-la-Gaillarde.

When Gabrielle was 11, Jeanne died at the age of 32. The children did not attend school. Her father sent his two sons to work as farm laborers and sent his three daughters to the convent of Aubazine, which ran an orphanage. The nuns taught Coco everything she knew about sewing and making clothes.

At age eighteen, Chanel, too old to remain at Aubazine, went to live in a boarding house for Catholic girls in the town of Moulins.

She became a seamstress and a nightclub singer. Her stage name was Coco, so she used that name publicly. 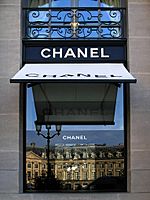 In 1913, Chanel opened her first shop in Deauville, France. Society women liked her simple wardrobe. In 1915, she opened a second shop in Biarritz.

Chanel became one of the first women fashion designers to create simple and practical clothes for the sporty women of the era. She took the color black, which was not used in fashion at the time and showed how "chic" it could be by wearing it.

The fabrics such as jersey and tricot were usually used to make men's underwear, but Chanel started to work with them to make women's fashion.

Short hair, tans, and casual styles were the new trends.

She banned corsets and other uncomfortable garments. 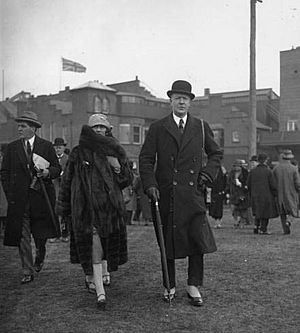 During her relationship with the Grand Duke Dmitri Pavlovich of Russia in 1920, she added a Russian touch to her dresses by embroidering Russian patterns on them.

Chanel was with Hugh Grosvenor, the 2nd Duke of Westminster from 1924 to 1931. During this time, she discovered the English tweed sweater, English men's suits, and English coats. She added these to her collections.

Chanel lived at the Hotel Ritz in Paris for over thirty years. During World War II, the Nazis occupied Paris, and her shops were closed. She had an affair with a Nazi officer, and was accused of being a collaborator. She moved to Switzerland, and gave up fashion.

After a 15-year gap, Chanel returned to fashion in 1954. She was shocked to see the new fashion trends, especially those by Christian Dior. She understood better than anyone the requirements and needs of an active woman’s lifestyle. Her 'comeback' collection was in 1954.

Chanel died in 1971. She is still influencing women’s lifestyles and clothing. The House of Chanel remains in business. It is a member of the Chambre syndicale de la haute couture, the top fashion clique in Paris. The House of Chanel produces modern versions of her best ideas.

All content from Kiddle encyclopedia articles (including the article images and facts) can be freely used under Attribution-ShareAlike license, unless stated otherwise. Cite this article:
Coco Chanel Facts for Kids. Kiddle Encyclopedia.