Coconut rice is a dish prepared by soaking white rice in coconut milk or cooking it with coconut flakes. As both the coconut and the rice-plant are commonly found in the tropics all-around the world, coconut rice too is found in many cultures throughout the world, spanning across the equator from the Indian subcontinent, Southeast Asia, South America, Central America, East Africa, West Africa, the Caribbean and Oceania. 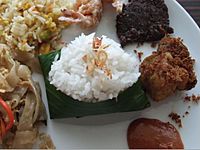 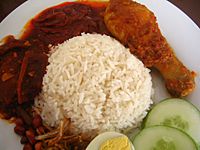 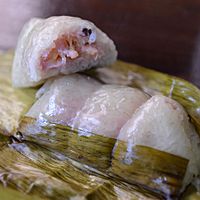 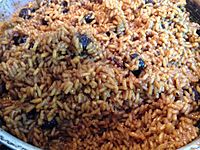 In Burmese cuisine, ohn htamin (အုန်းထမင်း), as rice cooked with coconut milk is called, is a ceremonial staple food, often eaten in lieu of plain white rice. In the most basic version of ohn htamin, rice is cooked with a base of coconut milk, along with fried shallots and salt, adding to the rice's savory and rich flavours. Ohn htamin is commonly paired with Burmese sibyan curries.

Nasi lemak (coconut milk and pandan leaf) is the most popular coconut rice recipe in Malaysia. It is considered a national dish of Malaysia.

In Thai cuisine, sweet coconut rice is very popular as a dessert or sweet snack. It is made with glutinous rice, coconut milk, sugar, salt and water and most famously paired with slices of ripe mango and an additional dollop of coconut cream. Outside of the mango season, it will also be eaten with other fruits or semi-sweet dishes. Other popular coconut rice desserts are khao tom mat, where sweet banana is steamed inside sticky rice while wrapped in a banana leaf, khao lam, where the rice and coconut milk mixture is steamed inside a section of bamboo, and khao niao kaeo, a very sweet dessert of glutinous rice, coconut milk, and large amounts of sugar, and most often pink or green in color.

In India, coconut rice ([[]]: కొబ్బరి అన్నం Telugu, ಕಾಯಿ ಅನ್ನಂ Kannada ) famous in the southern regions. In India, coconut rice usually made from basmati rice with mild coconut flavours acquired from coconut milk, and commonly served with curries. It is made with coconut flakes (or grated or desiccated/dry coconut). One way to make this dish is to make the rice separately (preferably using a rice variety which is light and fluffy when cooked) and then mixing it with the coconut mixture (coconut flakes toasted in sesame/coconut oil and spiced with paprika, nuts, curry powder/leaves, and other spices).

In Sri Lanka, coconut rice is often referred to as "milk rice" or kiribath. It is widely served across the nation on special occasions to mark the auspicious timings or moments. It is accompanied by lunu miris a spicy onion sambol ground with red chilli, onions, tomato, lime and salt with umbalakada. 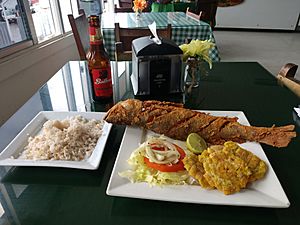 On the Caribbean coast of Colombia and Panama, arroz con coco is a typical side dish for fish. It is made with white rice cooked in a base of coconut milk and combined with shredded coconut meat, water, salt, raisins (optional), and sugar.

In the Caribbean coast of Honduras, rice is traditionally cooked with coconut oil, coconut milk, garlic, onions and red or black beans, a hearty dish known as "rice and beans". This plate is especially popular among Hondurans of African ancestry (Garifuna), but like many other Garifuna plates and foods with African influence, it is popular among all Hondurans and regarded as a typical Honduran food by Hondurans of all racial backgrounds.

In Puerto Rico coconut rice is usually served with fish and sweet plantains. The rice is sautéed with coconut oil and salt, shredded coconut and coconut milk are then added with the option of garlic, onions, cilantro, raisins, and kumquats. The rice is then coved with a banana leaf during the cooking process. Another popular coconut rice dish is arroz con dulce (coconut rice pudding) a dessert made with milk, coconut milk, coconut cream, raisins, vanilla, rum, sugar, ginger, and spice. Puerto Rican rice pudding is popular in Colombia, Cuba, and Venezuela.

In Samoa, coconut rice is known as Alaisa fa'apopo and is made by cooking white rice in coconut milk. A variation of coconut rice known as Koko alaisa is made with the addition of cocoa and orange leaves, often eaten as a snack or desert. Coconut rice is typically eaten on its own or as an accompaniment to dishes such as Moa fa'asaina.

All content from Kiddle encyclopedia articles (including the article images and facts) can be freely used under Attribution-ShareAlike license, unless stated otherwise. Cite this article:
Coconut rice Facts for Kids. Kiddle Encyclopedia.