Codell is an unincorporated community in Rooks County, Kansas, United States. As of the 2020 census, the population of the community and nearby areas was 49.

Codell is notable for its exceptional tornado history which earned it mention in Ripley's Believe It or Not!. The town was hit by tornadoes on May 20 in three successive years: 1916, 1917 and 1918.

The 1916 tornado was an F2 passing west of town in the early evening. The 1917 tornado was an F3 passing east of town also in the early evening. In 1918, Codell took a direct hit from an F4 tornado just after dark. The school, M. E. church, hotel and several residences were completely destroyed. Many more buildings were badly damaged. Although the school was rebuilt and a new high school was built in 1938, the town never fully recovered from the devastation of the 1918 tornado.

Codell lies in the middle of the double township of Paradise, south of the city of Stockton (the county seat of Rooks County) and near the southeastern corner of Rooks County. The community lies along the banks of Paradise Creek and an abandoned railroad line. The nearest city, Plainville, lies approximately 9 miles (14 km) away to the northwest by road; the community is connected via 24 Road to a state highway, K-18, which lies approximately 1 mile (1.6 km) to the north. 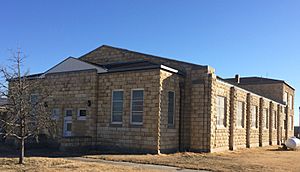 All content from Kiddle encyclopedia articles (including the article images and facts) can be freely used under Attribution-ShareAlike license, unless stated otherwise. Cite this article:
Codell, Kansas Facts for Kids. Kiddle Encyclopedia.