Plainville is a city in Rooks County, Kansas, United States. As of the 2020 census, the population of the city was 1,746. It was named from its setting upon the plains.

Washington Irving Griffin settled along a freight trail in an area known as Paradise Flats in 1877. In order to establish a post office, Griffin completed a US Postal Service application that required the signature of the local Justice of the Peace. While reviewing the application, Justice of the Peace Lambert P. Darland suggested the name “Plainville”. Griffin operated the Plainville post office and a small store from his sod house, the first structure in what would become the city of Plainville.

Plainville Mill & Elevator Co., (est. 1893) was a major employer and purchaser of locally grown wheat. The original mill was destroyed by fire in 1899 and soon replaced by a larger mill. The flour produced by the mill was of such fine quality, the company won a gold medal at the 1904 World’s Fair. The mill was again destroyed by fire in 1950. Plainville Mill & Elevator Co. was located on N First Street between Madison and Meridian Streets.

In 1909, fire devastated the Plainville business district. The fire apparently started in a butcher shop on the south side of Mill Street in the early morning hours. Fire quickly spread to the north side of Mill Street. Seventeen structures were destroyed before the fire was contained. The burned out wooden buildings were replaced with stone and brick structures, many still standing on Mill Street today.

Oil was discovered in Rooks County in 1927. The oil boom brought significant growth to Plainville in the 1940s and 1950s. The Bemis-Shutts oil field in the Saline River valley south of Plainville is one of the largest oil producers in the state of Kansas.

According to the United States Census Bureau, the city has a total area of 1.24 square miles (3.21 km2), all of it land.

There were 819 households, of which 29.8% had children under the age of 18 living with them, 49.9% were married couples living together, 8.9% had a female householder with no husband present, 4.2% had a male householder with no wife present, and 37.0% were non-families. 32.8% of all households were made up of individuals, and 16% had someone living alone who was 65 years of age or older. The average household size was 2.28 and the average family size was 2.91. 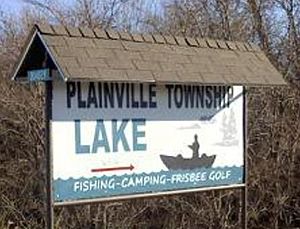 Plainville Township Lake is located a half mile west of town. Fishing, picnics and other outdoor recreation are popular activities. 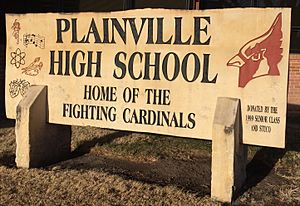 Plainville is part of Unified School District 270. The district has two schools.

Plainville Memorial Library is a public library serving the community since 1902.

Rooks County Health Center is located on the north end of Plainville.

Notable individuals who were born in and/or have lived in Plainville include:

All content from Kiddle encyclopedia articles (including the article images and facts) can be freely used under Attribution-ShareAlike license, unless stated otherwise. Cite this article:
Plainville, Kansas Facts for Kids. Kiddle Encyclopedia.