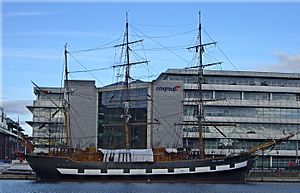 Coffin ships transported Irish immigrants to America and other colonies during the Great Irish Famine (1845-1852). They were the cheapest way to cross the Atlantic but it was a miserable and dangerous journey. The conditions on board were horrible because the ships were so crowded. Also, there was little food and water. There were often diseases on board.

One third (30%) of the passengers died before the arrival in Canada or the USA.

All content from Kiddle encyclopedia articles (including the article images and facts) can be freely used under Attribution-ShareAlike license, unless stated otherwise. Cite this article:
Coffin ship Facts for Kids. Kiddle Encyclopedia.