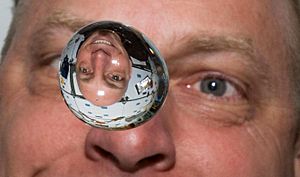 The cohesive character of water is clearly noticeable.

Cohesion (from Latin cohaerere "stick or stay together") or cohesive attraction or cohesive force is the action or property of like molecules sticking together, being mutually attractive.

It is a property of a substance that is caused by the shape and structure of its molecules, which makes the distribution of electrons irregular when molecules get close to one another, creating electrical attraction that can maintain a microscopic structure such as a water drop.

In other words, cohesion allows for surface tension, creating a "solid-like" state upon which light-weight or low-density materials can be placed.

Water, for example, is strongly cohesive as each molecule may make four hydrogen bonds to other water molecules in a tetrahedral configuration. This results in a relatively strong Coulomb force between molecules.

Cohesion, along with adhesion (attraction between unlike molecules), helps explain phenomena such as meniscus, surface tension and capillary action.

All content from Kiddle encyclopedia articles (including the article images and facts) can be freely used under Attribution-ShareAlike license, unless stated otherwise. Cite this article:
Cohesion (chemistry) Facts for Kids. Kiddle Encyclopedia.