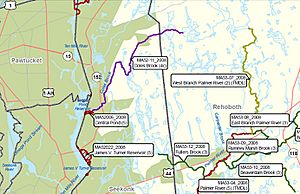 Coles Brook is a small stream that begins east of Pine Street in Rehoboth MA, and flows in a southwest direction to Central Pond and the James V. Turner Reservoir and the on the border of Seekonk, Massachusetts and East Providence, Rhode Island. It is a tributary of the Ten Mile River.

The brook is about 4.4 miles (7.1 km) long and has three small dams along its course. It flows through the Caratunk wildlife reservation in Seekonk, which has large portions of open space and wildlife, and is the site of Native American Camps, where artifact have been uncovered.

The Coles Brook is on the EPA list of impaired waterways, due to pathogens, although it has still been rated a Class B waterway, fishable and swimmable.

Dry Brook, Cascading Brook, and Muskrat Brook are the only tributaries of the Coles River, though it has several streams that also feed it.

Below is a list of all crossings over the Coles Brook. The list starts at the headwaters and goes downstream.

All content from Kiddle encyclopedia articles (including the article images and facts) can be freely used under Attribution-ShareAlike license, unless stated otherwise. Cite this article:
Coles Brook Facts for Kids. Kiddle Encyclopedia.