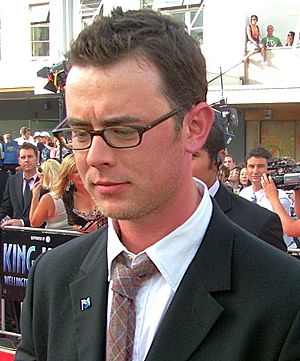 Hanks at the premiere of Peter Jackson's King Kong in Wellington, New Zealand

Colin Lewes Hanks (born November 24, 1977) is an American actor, producer and director. He is known for starring in films such as Orange County, King Kong, The House Bunny, The Great Buck Howard, and the Jumanji film series. His television credits include Roswell, Band of Brothers, Dexter, Fargo, The Good Guys, and Life in Pieces. He is the eldest son of actor Tom Hanks.

Hanks dated Busy Philipps in the 1990s while in college. In June 2009, Hanks became engaged to former New York publicist Samantha Bryant. The couple married on May 8, 2010, in Los Angeles. Together, they have two daughters, one born in 2011, the other born in 2013.

Hanks is a San Francisco Giants baseball fan and attended their World Series-clinching victory in Texas in November 2010. He also directed a 30 for 30 short about their disastrous Crazy Crab stint in the 1980s. He is also a fan of the San Francisco 49ers, Sacramento Kings, and Los Angeles Kings. He was the official Kevin and Bean LA Kings playoff correspondent for the 2012 and 2013 seasons. He is a Liverpool F.C. and Los Angeles FC soccer fan.

All content from Kiddle encyclopedia articles (including the article images and facts) can be freely used under Attribution-ShareAlike license, unless stated otherwise. Cite this article:
Colin Hanks Facts for Kids. Kiddle Encyclopedia.