The College of St Hild and St Bede, also known as Hild Bede, is a college of Durham University in England. It is the University's second largest collegiate body, with over 1000 students. The co-educational college was formed in 1975 following the merger of two much older single-sex institutions, the College of the Venerable Bede for men and St Hild's College for women.

Hild Bede is neither a Bailey nor a Hill college, and is situated on the banks of the River Wear between Durham's 'peninsula' and Gilesgate.

The College of the Venerable Bede, for men, was founded in 1838 with a small number of trainee schoolmasters. The college was expanded greatly over the next few decades with the assistance of trade unionist and future local MP William Crawford, who would later become the college's treasurer. Its sister institution, St Hild's College, was opened for the education of women on an adjacent site in 1858. Both colleges initially specialised in teacher training but in 1892 for Bede and 1896 for Hild they became associated with the federal University of Durham, offering B.A. and B.Sc. degrees alongside teaching in education. Graduates of St Hild's were the first female graduates from Durham in 1898. The Chapel of the Venerable Bede, completed in 1939 to celebrate Bede College's centenary, was designed by Paul Edward Paget.

The two colleges retained links throughout the next century with shared teaching and facilities. In the 1960s they constructed the shared Caedmon Complex. It was then that it was decided that the colleges should be formally merged and in 1975 they became the unitary College of St. Hild and St. Bede, a recognised college of the university. In 1979 Hild Bede joined the College Council, becoming a full constituent college of the university and ceasing to award its own PGCE qualifications. At this point some of the College buildings (including much of the teaching facilities of the Bede site) were occupied by the University's Department of Education, whilst the College centred its academic administration on the old Hild's site. 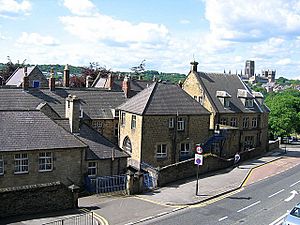 At the centre of college is the Caedmon Complex, which contains a dining hall, two bars (The Vernon Arms, named after the original Hild Bede Principal, Dr Vernon Armitage & The Undercroft Bar which is open for selected events only), music rooms and the only student-run cinema in Durham, Bede Film Soc.

The college is one of two colleges in Durham to have two chapels — The Chapel of St. Hild (now a function room named the Joachim Room) and The Chapel of the Venerable Bede (still in use).

The college also maintains a boat house used by the boat club on the river near the Caedmon Complex.

Unlike most colleges of the university, the student body is not divided into Junior and Middle Common Rooms, instead both the undergraduate and postgraduate communities are represented by a single Student Representative Council (SRC). The SRC does however contain a special postgraduate committee and maintains the physical Junior and Middle Common Rooms, both in the Hild Building. The SRC is run by an elected exec that is headed by a sabbatical president. The college also has a Senior Common Room (SCR) consisting of the college tutors, past and current members of college staff and invited members of the wider community.

To maintain the history of the two original colleges, males in the college wear the Bede colours of light and dark blue, the colours that the College are more widely known for, whilst female colours are the green and lilac of the original Hild College. The College Arms also represents the history of the precursor colleges, with the chief taken directly from the Arms of the College of the Venerable Bede and the chevron being adapted from the bend of Arms of St. Hild College.

The gowns worn by members of the college, retained from before the college became a constituent college of the University, differ from other Durham gowns in being made of brocaded fabric and being shorter. These are worn at matriculation and graduation, but not at formal hall. Formals are instead black tie events and happen around ten times a year.

Held in the Joachim Room, these are formal, gowned, black tie dinners that happen four times per year.

Like most Durham colleges, Hild Bede celebrates an annual college day, usually in early May. This day usually includes a Champagne Breakfast on the College Lawns; an optional service in the Cathedral; a buffet lunch in the Dining Hall and a marquee; picnics and barbecues on the lawns; and entertainment throughout the day including bands, fairground-style events, Disco, Ceilidh and College Olympics.

In late April the college is host to the Sounding Retreat ceremony in conjunction with the Durham Light Infantry Association. Initially instituted to remember students and staff of the Bede College Company who lost their lives at the Second Battle of Ypres, it now commemorates all former members of the college who have died in conflicts around the world.

The Winter and Summer Ball

The college also hosts two annual balls, the Christmas Ball at the end of Michaelmas Term and the Summer Ball after exams have finished. The Summer Ball has an annual budget of £40,000 and usually attracts a headline act. It has attracted acts such as The Feeling, Scouting for Girls, Basshunter and Redlight. It is one of the biggest balls in Durham, primarily due to the size of the budget and the entertainment provided. 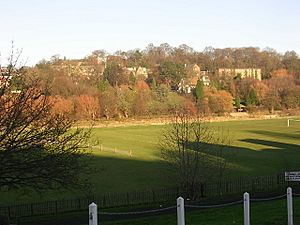 Playing fields of the College.

In Epiphany 2014, Bede RFC secured a ‘double’: winning both the league and the floodlit cup. Having finished the season winning 15/16 matches, scoring 47 tries and conceding just seven, Bede have cemented their status as one of the best rugby teams in the college’s recent history. The side were assured of league victory with four matches still in hand. 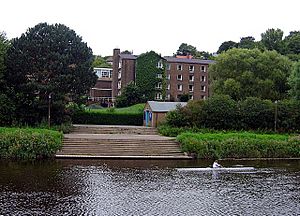 Hild Bede Theatre is the biggest college drama society in Durham and puts on at least three productions annually, including a musical at the beginning of the third term. In 2009-10 they won two Durham Oscars, "best college play" for "Who's afraid of Virginia Woolf" and "Best college musical" for 42nd Street. They have won the latter more times than any other Durham theatre group, having won for the last 7 years in a row.

Hild Bede houses the only student cinema in Durham, Bede Film Society. The society used to showcase recent films on a 35mm projector, but, in celebration of the Bede Film Society's 50th anniversary, has since installed a new digital projector funded by £40,000 of alumni donations, with Dolby Digital surround sound. Films are shown on most weekends of term, with the occasional midweek showing. The society was started over fifty years ago, before the merging of the two colleges, showing films on a 16mm projector.

College of the Venerable Bede 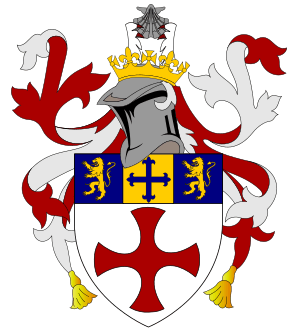 The College of the Venerable Bede's coat of arms 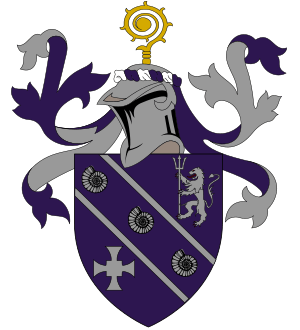 All content from Kiddle encyclopedia articles (including the article images and facts) can be freely used under Attribution-ShareAlike license, unless stated otherwise. Cite this article:
College of St Hild and St Bede, Durham Facts for Kids. Kiddle Encyclopedia.