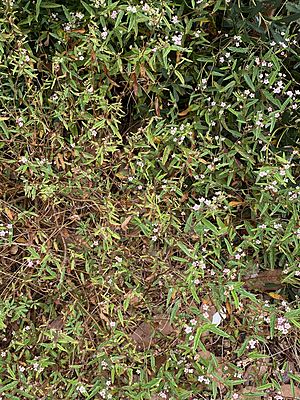 Commersonia amystia is a species of flowering plant in the family Malvaceae and endemic to eastern Australia. It is a dwarf shrub with narrow egg-shaped leaves that are densely covered with star-like hairs on the lower surface, and has flowers with five white sepals that turn pink as they age, and five smaller white petals.

Commersonia amystia was first formally described in 2008 by Carolyn F. Wilkins and Lachlan Mackenzie Copeland in the journal Telopea from material collected by Copeland near Inverell in 2003. The specific epithet (amystia) means "large cup" and refers to the base of the petals.

This commersonia grows in rock crevices in woodland and is known from populations near Inverell in New South Wales and in the Ballandean-Stanthorpe in Queensland.

Commersonia amystia appears to be killed by fire but to germinate abundantly after, then appears to become senescent a few years later.

All content from Kiddle encyclopedia articles (including the article images and facts) can be freely used under Attribution-ShareAlike license, unless stated otherwise. Cite this article:
Commersonia amystia Facts for Kids. Kiddle Encyclopedia.